One of the more heartwarming aspects of the British is their insistence on observing hallowed traditions, no matter how silly they may look to modern eyes. One such custom is the use of animal mascots by several regiments of the Army.

One such mascot retired today.

From his gleaming headplate to his immaculately groomed whiskers, Lance Corporal William Windsor looked every inch the proud old soldier as he left camp for the last time yesterday. 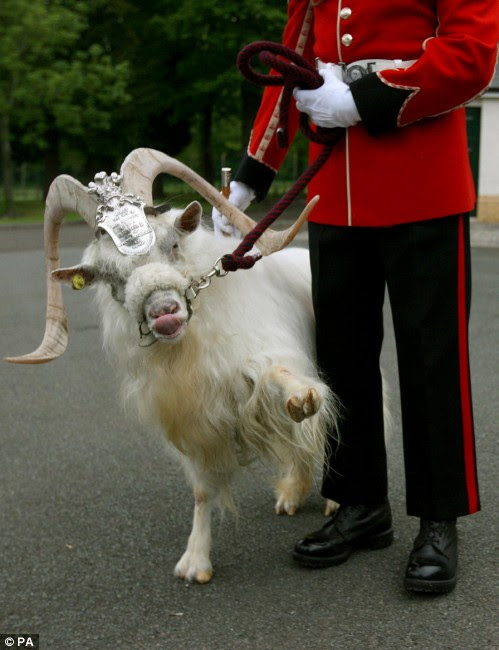 Cheering comrades lined the route from his pen to the trailer waiting to take him to the zoo, where the Army veteran informally known as Billy the Goat will spend his retirement.

His send-off came with full military pomp and ceremony - befitting-his lifetime's service with the 1st Battalion the Royal Welsh.

He has travelled overseas, met royalty and led every battalion parade.

For the most part Billy, aged nine, has served as unbleatingly as a goat can - although he did once butt heads with top brass when he was temporarily demoted for not marching in time.

Today, his comrades showed their appreciation for Billy's eight years of service at their base in Chester. 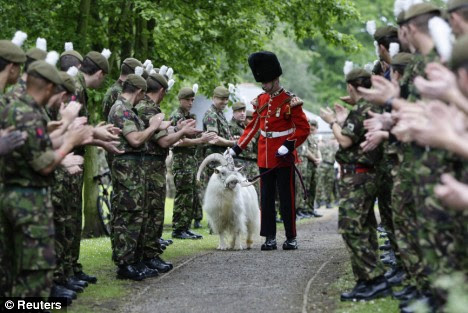 Captain Nick Zorab said: ‘When people hear that we have a goat among the battalion, they think we must be kidding.

‘But having a goat among our ranks is a tradition we have had for over 200 years.’

The history of the regimental goat dates back to the American War of Independence when a wild goat wandered on to a battlefield and ended up leading the regimental Colours at the end of a battle.

In 1844, Queen Victoria presented the first Royal goat, and since then most have been presented by the sovereign.

The regimental goat is considered a full member of the battalion. He marches in front of the Battalion on all ceremonial duties and is much loved by all ranks.

He has a full time carer known as the Goat Major who ensures the welfare of the goat at all times.

Billy’s replacement will be unveiled in June when a kid will be collected from a herd on the Great Orme, North Wales.

More pictures at the link.

Of course, other armies aren't quite as rigorous in their selection, care and feeding of mascots. I recall a certain unit in South Africa that caught a young wildebeest, and kept it in a paddock, feeding it as it grew. It never became tame, and would take a bite at anyone it could reach. It came to an unfortunate end when the Sergeant-Major overheard some of the troops discussing his facial resemblance to the creature, and speculating about his ancestry. I understand the troops concerned did punishment drills for weeks thereafter, while the wildebeest was the guest of honor (so to speak) at a barbecue at the Senior NCO's Mess the following weekend!