What people will do for fame!


It seems people will go to almost any lengths to get their names in the Guiness Book of Records. A young man in Utah has just gone farther than I'd ever be willing to go!

Never mind the ick factor, a Utah boy is trying to get into the record books by covering his face with live snails. Eleven-year-old Fin Keheler, from Sandy, allowed 43 of the slimy mollusks to be put on his face Saturday. He wants the Guinness World Records to verify his effort. 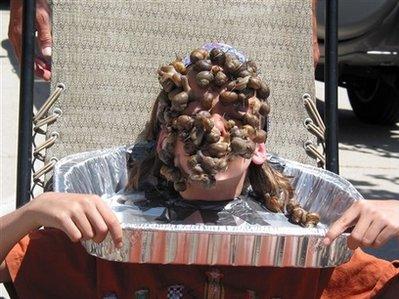 Fin made three attempts on Saturday. Sitting back in a reclining chair, snails gathered from neighbors' gardens were carefully placed on his face. Those that remained for at least 10 seconds were counted.

I shudder just to look at that picture! Snail slime all over my face? Not for me, thanks!