I've been interested to read about Honda's new concept for a vertical take-off and landing flying car, conceived for them by European designer John Mahieddinne. It's known as the 'Honda Fuzo'. 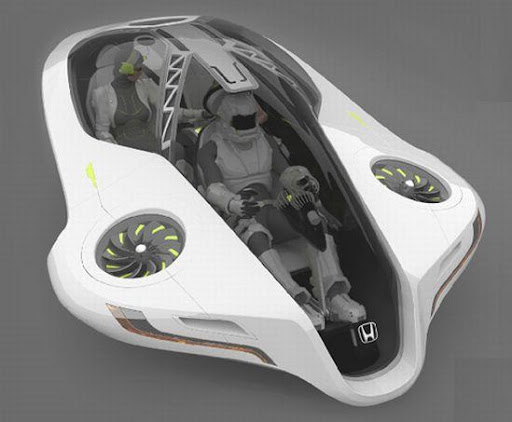 The driver sits alone in front of two passengers. The vehicle's controlled by joysticks, one to turn on its axis, the other to control tilt and ascent or descent. Its four turbines, two horizontal at the front and two vertical on the rear side panels, double as wheels for ground transportation, swinging out of their housings when required. 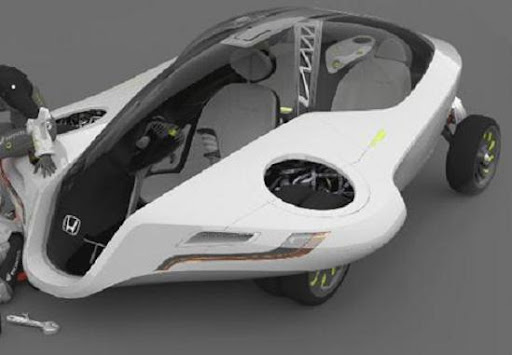 The body is constructed (in theory, anyway) of carbon fiber, Kevlar and carbon nanotubes. The vehicle has a fly-by-wire system with GPS positioning and navigation systems that (theoretically) can keep it from colliding with any other vehicle. In case of accident, both internal and external airbags would deploy, to protect both the occupants and anyone it struck from injury. Given that it's supposed to be capable of air speeds of up to 350 mph, and ground speeds comparable to present vehicles, I guess you'd need them! 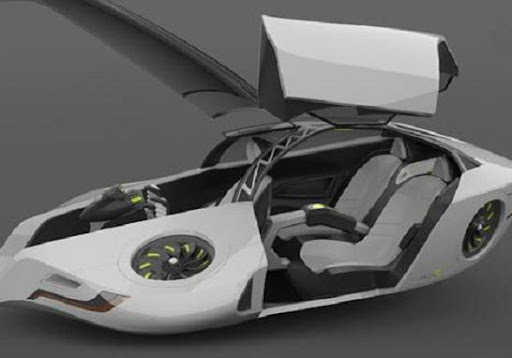 Of course, this is only a computer-generated concept design. The state of the automotive and aeronautical art is still nowhere near the level necessary to build one. Still, it's a taste of what may lie in the future for our children's children.

(Personally, if I have to wear a protective suit like that while driving, I think I'll pass! I may not be all that handsome, but hiding my face under a Storm-Trooper's helmet out of Star Wars is taking improvement altogether too far, thank you very much!)

I'm so glad you went the 'storm trooper' direction there! That was the first thought that went through my mind when I saw the pics.

I don't see where the forward in-flight propulsion comes from.

There have been some prototypes made using vectors thrust. However, none could produce the necessary thrust to lift off. I suspect the fans will have to be much bigger and powered by more powerful engines.

It's one thing to build a hovercraft with ducted fans. It's another to achieve flight.