You're growing your veggies in WHAT???


I'm amazed to read of the latest idea in home cultivation.

Dozens handed in old underwear which will now be used, alongside stock contributed by Marks and Spencer, in a 'good life' display at Hampton Court Palace Flower Show , from 7 – 12 July 2009. 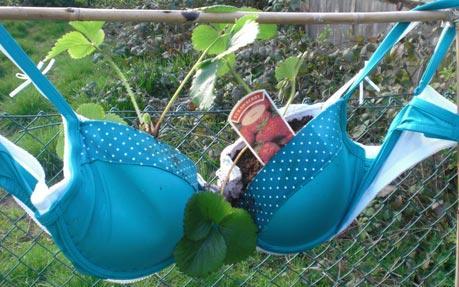 Georgie Webb of the RHS, said old undies could be used like hanging baskets where people have little space.

"Due to their conical shape, bras are ideal containers for turning into hanging baskets, and if you sew two together, you have what is best described as a 'hanging bra-sket'. Once filled with compost you can grow salad leaves, herbs, alpine strawberries and even tumbling cherry tomatoes in them; the bigger the bra the more you can grow. But the serious message behind the 'bra-skets' is that you do not need a lot of space or even a lot of money to start growing your own food – just a bit of imagination."

Y'know, I can see difficulties here. Just how do you invite colleagues over for an after-work beer, and explain casually to them, "Oh, don't mind the bra hanging over the lamp, or the panties suspended over the dining-room table. That's just our herb garden!"

This perhaps the greatest advance in recycling in decades!!

What better place could there be to grow a nice set of melons?