He'll never live this down!


I'm laughing at a report of a US Army soldier who adopted a . . . shall we say, unorthodox camouflage scheme while fighting the Taleban in Afghanistan.

A U.S. soldier serving in Afghanistan has become a media sensation after he was photographed fighting Taliban forces while stripped down to his skivvies.

Army Spc. Zachary Boyd, 19, who hails from Fort Worth, Texas, said he was in his sleeping quarters at Firebase Restrepo in the Korengal Valley of Afghanistan's Kunar province when the Taliban attacked, forcing him to take up a defensive position while clad only in his helmet, protective vest, a T-shirt and his pink "I Love NY" boxer shorts, the Fort Worth Star-Telegram reported Thursday. 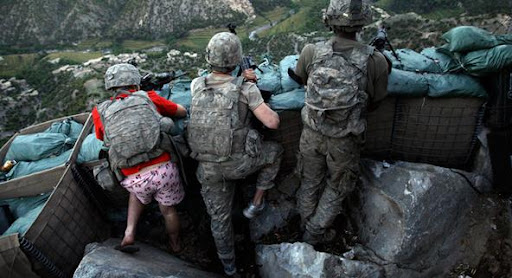 A wire service photographer snapped a picture of Boyd rushing into action in his undershorts and the snapshot wound up on the front pages of the Star-Telegram and The New York Times.

The soldier's mother, Sheree Boyd, said her son called Monday night to tell her his picture might be in the Times.

"He said, 'I hear the Times is what they put on the president's desk,'" she said. "Then he told us, 'I may not have a job anymore after the president has seen me out of uniform.'"

Mrs. Boyd said she was not surprised to see her "Zacho" in pink underpants.

"It was typical," she said. "He has always been an interesting little character."

Er . . . Mrs. Boyd, I'm not sure that "Zacho" will thank you for giving away his nickname, or for describing him to all the world as "an interesting little character". He'll be known as "the soldier in pink boxers" for the rest of his military service, that's for sure! I can just imagine what his platoon sergeant had to say to him about that . . . as can most of us who've served! (It takes an informed imagination, you understand.)

Brave: Going into the fight in the first place.

Crazy: Going into the fight in a red shirt! My goodness, have you ever seen the survival statistics for new guys in red shirts?

This reminds me of a joke, purportedly from the Napoleonic Wars:

Why do the British wear red jackets? To keep their mates from being scared of the blood.

Why do the French wear brown pants? (fill in the blank)

Another thought: Maybe the boxers weren't pink until he washed them with that shirt. Mom should have come to his defense with something like: "No matter how many times I told him, I could never get Zacho to separate the whites from the darks."

I have never served in the US Army, nor have i served in a war, but i have done twelve months of military service as a drafted Sergeant in the Swedish Army and then servde for five years in the Swedish voluntary homedefense, so i believe that i am somewhat qualified to have an opinion.

In my opinion there isnt much to say about the soldiers dress, he had a choice, dress up in complete uniform and possibly be too late and thereby deciding the fight in the enemys favor, or pull on his helmet and west, grab his gun and show up. Showing up with Gun and protective gear in time is far better than showing up in complete gear too late.

I fully agree with Simon. He has his vest, his helmet and his weapon; the rest is gravy.

I agree with Simon. The most important thing in that situation was to get combat ready as soon as possible.

Not the first soldier to be caught in his underwear, but he certainly found a way to do it in style.

Actually he got noticed and applauded by the minister of defence.