I saw this news report, and debated whether to blog about it. After all, the jokes about blondes are so numerous, and their reputation so ditzy, that I really didn't want to make things worse! However, in the end, I couldn't help myself . . .

A parade of blonde women that took place over the weekend through the streets of Riga is set to become an annual event after organisers hailed it as a success.

"Frankly speaking, I didn't expect such a response from media all over the world," said Marika Gederte of the Latvian Blondes Association.

"This is such a great idea to cheer up society during an economic crisis and we expect to turn this project into an international tourism event which will attract people to visit our country," she told the German Press Agency dpa. 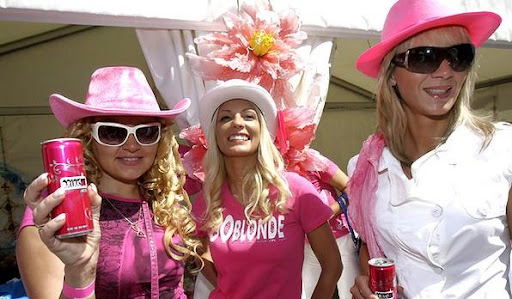 Around 1000 blondes took part in the celebration at the weekend.

Bemused onlookers, including many highly appreciative young men, watched awestruck as the fair-haired maidens dressed in pink and white marched in serried ranks through the sunlit city accompanied by a blonde orchestra.

Gederte said she was not worried about the politically incorrect undertones of the event.

"Every activity which gives more light and happiness is great. It just seems blondes have more initative than anybody else and know how to have fun!" she said. 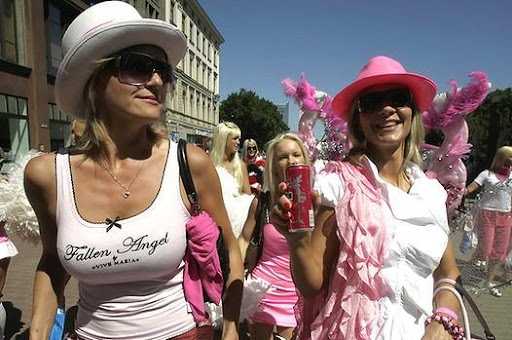 Ahead of the event, blonde individuals and teams registered at a dedicated website which included a campaign to urge UNESCO to make May 31 "International Blondes Day."

As well as the main parade, participants competed in blonde sports tournaments, a fashion show and a group shopping spree using their own blonde-branded credit cards.

I won't make any blonde jokes, I promise. After all, Denny over at Grouchy Old Cripple has cornered the market in them! (Each word in that sentence links to a different joke.)

sorry, can't help myself .. heard this this morning:

A blonde hurries into the emergency room late one night with the tip of her index finger shot off.

"How did this happen?" the emergency room doctor asked her.

Well, I was trying to commit suicide, the blonde replied.

"What?" sputtered the doctor. "You tried to commit suicide by shooting your finger off?"

"And then?" asked the doctor.

"Then I put the gun in my mouth, and I thought: I just paid $3000.00 to get my teeth straightened, I'm not shooting myself in the mouth."

"Then I put the gun to my ear, and I thought: This is going to make a loud noise. So I put my finger in the other ear before I pulled the trigger."

I can't say these Latvian Blondes are dumb. Any excuse for a parade way up in the Baltics is a good one.

While this blonde parade had some good results as a second generation Latvian woman it makes me cringe.The behind the times barbie doll crossed with Hugh Hefner girls of the playboy mansion image. Some were completed by cheap silicon chest jobs.
There are many different ways to present as sexy striking blondes.Next time girls if you need to copy others try a healthy nordic look. Leave behind the dumbest Yank (no offence meant to Americans)stereo type so as not to embaress your overseas relatives.