The underclass at "play"


I suppose congratulations are due to the Los Angeles Lakers for their victory in the NBA Championship. The same, however, can't be said for many of their alleged 'fans' in their home town. News reports (I've linked only two of many) speak of violent clashes with police, assaults on innocent passers-by, the looting of at least two stores, and attempts to trash a passing commuter train, an information kiosk, and other public amenities. Up to 25 arrests are reported. 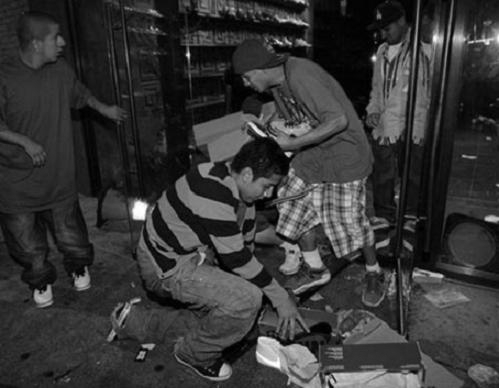 Why is it that some people seem to go absolutely batshit insane after something like this? What possible 'celebration' can justify such criminal hooliganism? And why is it regarded as inevitable? This is hardly the first time it's happened. 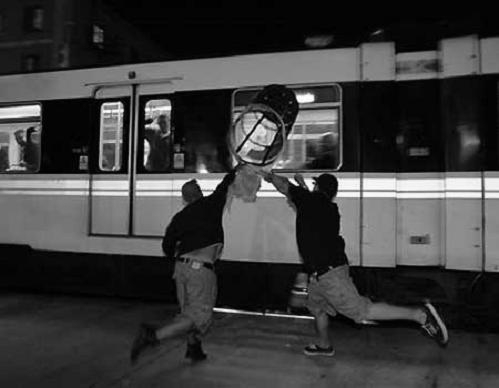 Fortunately, I live in a town where such stupidity is most unlikely to happen. At the first sign of it, most of the residents would be unlimbering shotguns and deer rifles, drawing a bead on the primary offenders, and just waiting for them to do something similar to what you see in the photographs. (Thanks to T.J. for e-mailing them to me). After the first few 'celebrators' bit the dust, things would get a lot quieter . . . Certainly, the occupants of the car shown below, being attacked by 'revelers', would have every right to defend themselves. They were clearly in legally and morally justifiable fear for their lives and safety. 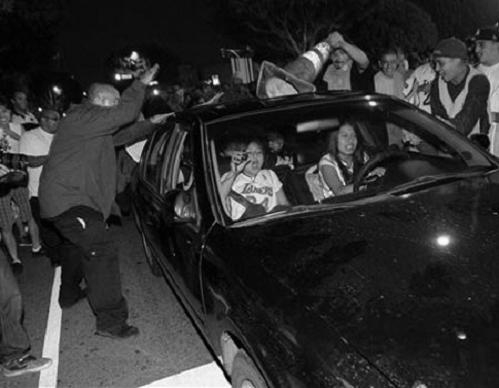 There are some things that no civilized society can permit or tolerate. This sort of crass hooliganism on the part of an underclass is most emphatically one of them. The peddlers of racist doctrines - the Jesse Jacksons, Al Sharptons and the like - will doubtless protest that such an attitude is racist, but race doesn't even begin to enter into it. It's purely a matter of what is, and isn't, acceptable behavior. The skin color of the perpetrators is irrelevant.

It's time this sort of nonsense was stamped out. Hard.

I wish the cops would shoot to kill when "fans" use a sports championship as an excuse to loot and vandalize private or public property.

You are right, that would quell things quickly, not to mention weed some folks out of the gene pool.

They are looters. Looters should be shot "to encourage the others."

Recommended reading: Bill Buford's "Among the Thugs". Buford is liberal like most journalists, but unlike most he actually does what he's supposed to: he goes and interacts as much as possible with the people he's meaning to write about, and he reports what he hears and sees. In this case he spent some years writing about and interacting with British soccer hooligans, and his bafflement at their joy in violence is plain to see even in the detailed reporting.

And it really is joy in violence- it's not about sports, it's about the thrill of crowd violence. Possibly the most interesting part of the book is his conversation with a British police inspector on the topic of US sporting events and how it's taken for granted most of the time that there will *not* be rioting, vandalism, or any such thing after the game.