I've enjoyed reading an article in the Daily Mail giving a bunch of facts and figures about nature and animals that beggar the imagination. Here are a few examples.

Fish: Did you know that many species of polar fish produce their own antifreeze, in the form of large protein molecules in the blood?

Speed of flight: If you use body lengths per second (bl/sec) as a measure of speed, a supersonic fighter jet can cover up to 150 bl/sec; the Space Shuttle at its fastest can cover 207 bl/sec; but the tiny Anna's Hummingbird eclipses them all, at 383 bl/sec! 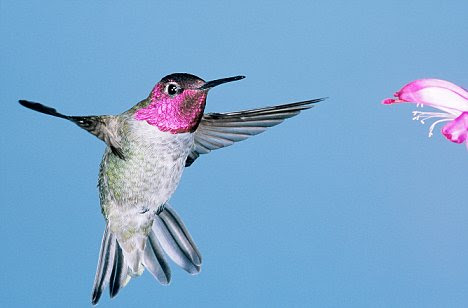 Migration: According to the article;

About 5,500 species — about half of all bird species — undertake some form of migration. On their first trip, some young birds simply follow their parents, but many, like young swallows, set out unchaperoned.

Yet how do they know where to go?

Again, no one really knows.

There's much more at the link. It's a fascinating read.

Re: Migration. It just goes to show that evolution is not the correct explanation for the variety of species we have on earth.

Lishman is a Canadian conservationist who taught birds forgotten migration skills by leading them south in an ultralight aircraft.

For Peter, an opportunity to combines 2 interests: flying and migration.

When I was growing up, we had a Honeysuckle bush next to the house and Hummingbirds were around it whenever the bush bloomed. They scared me because I thought they were big honey bees. :-)

Man, did those things move if you got too close!