It seems there's a town in Austria called F***ing. Yes, it's spelt the way we spell our swear word, but they (allegedly) pronounce it 'Fooking', and - in German - it apparently has nothing to do with a sex act. 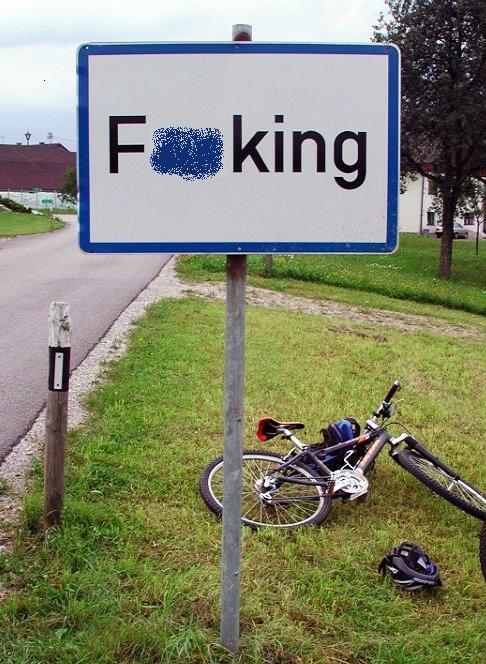 Road sign for the town in Austria - censored so as to be safe for work.
(Image courtesy of Wikipedia. For an uncensored view, click the link.)

The town has had a very real problem over the years with tourists posing for photos underneath signs in the town . . . and having their pictures taken while having real or simulated sex. Yes, we get it - doing it underneath a sign that says ‘F***ing.’ Ha ha ha.

So what solution have town officials come up with to curb this activity? Why, install cameras and take some photos of their own, of course! They’re hoping the cameras will be a deterrent for people when they know they are being watched and instead of going full-out with what the signage suggests, they’ll just pose for a pic instead.

Something tells us that this will not solve the problem.

That's not the only problem they're facing:

An Austrian village called F***ing will not change its name despite sniggering Brits making off with its roadsigns.

Mayor Siegfried Hauppl has asked visitors to lay off the signs which began to attract outside attention after British and US soldiers passing through in 1945 illuminated the locals as to the English meaning of F***ing, Ananova reports.

Hauppl explained: "We had a vote last year on whether to rename the town, but decided to keep it as it is. After all, F***ing has existed for 800 years, probably when a Mr F*** or the F*** family moved into the area. The 'ing' was added as a word for settlement."

We reckon that F***ing has been around a lot longer than 800 years, otherwise there wouldn't have been any F***s to lend their name to the village in the first place, would there?

Ah, the joys of being the mayor of a place with a name like that!

However, the residents of a German town named W**k have weighed in with some helpful (?) advice to their Austrian neighbors.

Fed-up residents of the Austrian town of F**king are being offered a helping hand by their German neighbours in a town named W**k.

The people of F**king have grown tired of English-speaking tourists acting out their village's name (and also, no doubt, of amused British journalists writing stories about it.)

But now residents of the German town of W**k have told them grasp the opportunity.

Juergen Stoll, who runs the W**k guest house, said: 'The people in F**king should cash in on their fame.

'I have so many visitors here at the W**k guest house that we have the mattresses all in a line in one big room for people to sleep on. Otherwise we couldn't fit everybody in.

'If the name helps to bring the tourists in, then why not cash in on it? In these credit crunch times every little helps,' he added.

In summer visitors can take hikes up the 1,780 metre W**k Mountain, or, if they prefer, take it easy in the four seater W**k cable car that goes all the way to the peak.

There are numerous opportunities to enjoy paragliding at W**k, and in winter it's possible to go skiing on the W**k piste.

Local tourism chiefs say they realised that although the name meant nothing in German, it was a goldmine when it came to attracting English-speaking visitors.

A W**k tourism spokesman said: 'There are W**k postcards on sale although many people prefer to take their own W**k holiday snaps standing beside Welcome to W**k signs.' 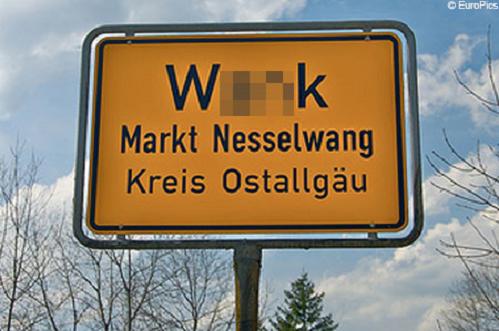 In Denmark there is a town called Mittelfart...
;)