The reality behind the fiction


I note that Quentin Tarantino's new film, Inglourious Basterds, is now playing to packed houses worldwide. I won't bother to see it myself - it bears no relationship whatsoever to the facts of history, and I've seen more than enough real-life bloodshed to be in no hurry to indulge in buckets of the stuff in fictional form - but there's a story behind the fiction.

There was, indeed, a group of former German Jews who formed a special 'X Troop' in the British Commandos during World War II. Kim Masters, the daughter of one of them, recently wrote about her father's war. Here's a brief excerpt.

My father was an Inglourious Basterd. Actually, he was the opposite of that. But he was a Jewish commando in the British Army during World War II. 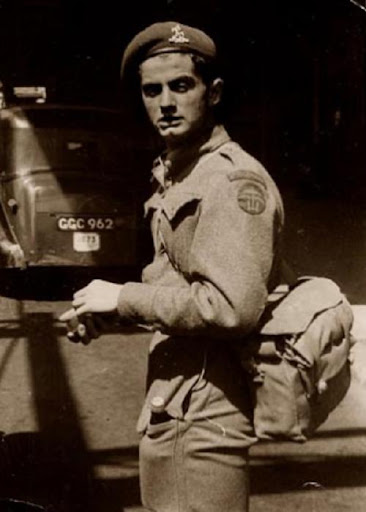 And for my father, this fight was very personal. A native of Vienna, he belonged to a secret unit made up of refugees from the Nazis. They went on reconnaissance missions in enemy territory; they stormed the beaches of Normandy on D-Day; they shot at, blew up, captured, and interrogated German soldiers.

They didn’t take scalps or carve swastikas into anybody’s forehead.

Those fanciful elements are present in Inglourious Basterds, Quentin Tarantino’s cartoonish tale of an American death squad made up of Jewish soldiers. Their commander (Brad Pitt) exhorts them to bring him the scalps at least 100 Nazis each. Soon after, the Tarantino violence-porn begins.

The real story is better.

My father’s first taste of battle didn’t come until June 6, 1944—D-Day. His unit crossed the rough waters of the English Channel and when they approached Sword Beach, some of his comrades were killed even before they could get off the landing craft. My father carried a rucksack, a Tommy gun, lots of spare rounds of ammunition, various grenades and a collapsible bicycle. He also carried a heavy hemp rope to be used in the event that the retreating Germans managed to blow out a bridge that was a key supply route for the advancing Allies. (He was very pleased, when he arrived at Pegasus Bridge, to find it intact. He could finally abandon that rope.)

The commandos were valued not only because they specialized in reconnaissance but because their fluency in German was useful in interrogating captured troops. As my father’s unit moved inland on their bicycles, the man in the lead position was shot through the head. The troops took cover and then the captain told my father to approach the village ahead. He didn’t want my father to take a stealth approach but to walk down the open road. With a sinking feeling, my father understood that his mission was to draw German fire so the captain could see where it was coming from. Realizing that there was no time to do more careful reconnaissance, my father accepted what he saw as a likely death sentence.

“All that training going to waste,” he lamented. Then he remembered having seen Gunga Din in which Cary Grant, surrounded by the enemy, says coolly, “You are all under arrest.” That inspired my father as he strode down the center of the road, shouting in German: “Surrender, all of you! Come out! You are completely surrounded and don’t have a chance!”

For a time all was silent. Then a German soldier popped up from behind a parapet and fired. My father dropped to his knee and fired back. Each missed the other. My father’s gun jammed. The German dove for cover. My father went flat on his stomach to clear his gun. As he prepared to shoot again he heard a noise and there, behind him, his entire troop was charging, bayonets fixed. The soldier in the lead shot two enemy soldiers concealed in a ditch to the left of the road, each with a belt-fed German machine gun.

When my father approached, he saw that both looked “appallingly young.” One was severely wounded; my father interrogated the other, who said they were 17 and 15 years old. The English soldier who had shot them asked my father how to say, “I’m sorry” in German.

In 1997, when he was 75, my father published his memoir: Striking Back: A Jewish Commando’s War Against the Nazis.

He did a great deal of public speaking and contributed to historian Stephen Ambrose’s books on the war. He very much wanted the world to know about X Troop, the Jewish commandos who fought heroically and took exceptionally high casualties, to counter the image of Jews being herded to slaughter.

There's much more at the link. Highly recommended reading.

Great story. Thanks for the link

How interesting! I had no idea. I'm feeling that way a bit these days, about WWII history, as I'm reading a memoir ( Abandoned and Forgotten) about another aspect of the War, the fate of the Germans forced from their homes. The author ends up orphaned and talks about the ruthless procedure where they were stripped of their possessions, their property, everything -- and no provisions of where to go. And I never knew it happened!

My husband loves reading about this, too -- I'm going to tell him about this book.