But what's the point?


Some genius (?) has invented coffee that you sniff, rather than sip. The Daily Mail reports: 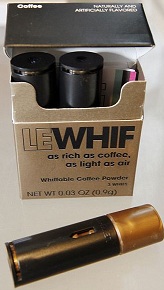 First there was the chocolate aerosol that gave chocoholics all the flavour without the calories of their favourite snack.

Now the same scientists have come up with the coffee spray that gives you as much caffeine as found in one single espresso.

'Le Whif first offered the taste of chocolate without the calories, and now it offers the kick of coffee without the cup,' said Prof Edwards.

The sticks are sold individually for $3 or in boxes of three for $8. Each stick delivers 100 milligrams of caffeine, the equivalent of a cup of espresso.

A 'whiffer' can get up to nine hits from an individual stick, depending on how hard they inhale.

All of Le Whifs are biodegradable, organic and contain less than one calorie.

I have to ask . . . why? Why take away the sheer pleasure of sipping a good cup of coffee? Isn't the taste at least half the fun, to go with the smell?

I think I'll stick to the liquid variety, thank you very much!