I don't know how many of my readers are familiar with old sea shanties. I grew up with them, first hearing my father hum snatches of melody, then listening to recordings, then reading about them (particularly in Arthur Ransome's timeless and still-popular 'Swallows And Amazons' series of books for children), and also singing them during my years in the Scouts and Naval Cadets.

Outside nautical circles, shanties don't seem very well-known, except for occasional exposure to a broader public through films such as Disney's 'Pirates Of The Caribbean' series. However, that may be about to change. The Guardian reports:

For 15 years they have been entertaining locals and visitors in the pretty Cornish fishing village of Port Isaac with their traditional songs of loss and longing.

But now a group of fishermen is going global after landing a £1m record deal that could take their repertoire of sea shanties to the top of the charts. 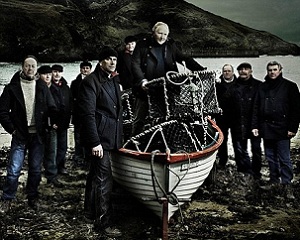 The Fisherman's Friends have secured an album deal with Universal, the company behind acts such as Lady Gaga, Take That and Amy Winehouse. The 10-strong group, which also has a date at the Glastonbury festival, will issue an album of traditional tunes and folk songs next month.

The album, Port Isaac's Fisherman's Friends, was due to be released on the group's own label, Marine Records. But Universal decided to give them a break after record producer Rupert Christie spotted the group performing in a pub while he was on holiday.

The singers have been performing locally for more than 15 years. The troupe – who are or have been fishermen, lifeboatmen and coastguards – perform weekly shows on the harbour front during the summer months in the fishing village of Port Isaac.

Founding member Jeremy Brown, who has two brothers in the group, said: "We all grew up together with the exception of one member of the group, although he has lived in the village for maybe 25 or 30 years so he is almost one of us.

"We get together each Friday night on this area of concrete by the harbour which is a lovely setting – unless it is raining and blowing. Then we just retire to the pub."

Johnny Depp helped to float interest in sea shanties when he developed a passion for them after filming Pirates Of The Caribbean. He was behind an album of shanties performed by artists such as Bono, Richard Thompson, Nick Cave and Jarvis Cocker, called Rogues Gallery and released in 2006. The Coral included a sea shanty-style track Spanish Main on their debut album.

Sea shanties were originally sung by the crews of ships while they worked on deck and the term comes from the French verb "chanter" (to sing).

The Fisherman's Friends have their own Web site, where their first two CD's are available for purchase. A new Web site is being developed to coincide with the launch of their latest (and first 'commercial') album.

I couldn't be more pleased at the news. I hope many people will come to know and love the old shanties as I do (and yes, dear readers, that means you too!). Here's a video clip of the Fisherman's Friends singing 'Drunken Sailor' to whet your appetite.

I hope they sell a million!

A lot of their songs are sea shanties. All of them are good. I watch them live at the Maryland Ren Fair.