'Seeing' with the tongue?


I'm astonished to read of a new device that's helping a British soldier, blinded in Iraq, to see again - using his tongue! The Guardian reports: 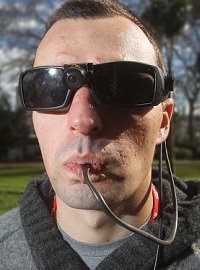 Lance Corporal Craig Lundberg, 24, from Walton, Liverpool, lost his sight while on patrol with the 2nd Battalion Duke of Lancaster's in Basra in 2007. He has been selected by the Ministry of Defence to test the BrainPort miniature video camera and sensory equipment, which could revolutionise treatment for blind patients.

The device works by converting visual images into a series of electrical pulses that are relayed to the tongue. The differing strengths and patterns of the tingles can be interpreted to build up a picture of surroundings and enable users to navigate around objects.

The device consists of a tiny video camera attached to a pair of sunglasses. It is linked by wires to a plastic lollypop-like sensor which users place on their tongue to receive the electrical impulses.

"It feels like licking a nine-volt battery or like popping candy," Lundberg explained. "The camera sends signals down onto the lollypop and onto your tongue, you can then determine what they mean and transfer it to shapes.

"It's only a prototype, but the potential to change my life is massive. It has enabled me to pick up objects straight away, I can reach out and pick them up when before I would be fumbling around."

Here's a video report from Sky news, in which L/Cpl. Lundberg talks about the device.

That's amazing! 'Re-programming' the brain to interpret impulses on the tongue through its vision center? Isn't it marvelous how some technician or scientist was able to 'think outside the box' like that, and develop this solution?