I stumbled across this Web site in the process of wandering around the Internet. They sell this stuff. 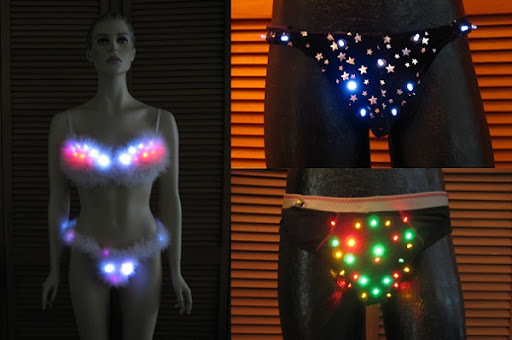 I'm still trying to figure out the utility of lighted underwear. Maybe I'm mistaken, but I thought that underwear was . . . well, underwear! I can't imagine what good lights would do beneath covering garments - and then there's the risk of electric shock . . . If you want to do a Superman or a Batman and wear your underwear outside your clothing (and how the hell did the designers of those characters come up with that idea, anyway???), it's no longer underwear, and you may as well be advertising something. (But then, perhaps the wearers are . . .)

I'm afraid sometimes I just don't get it. Call me square, baby, but I just ain't hip to this.

Labels: Boys and their toys, Silly, Weird
Email ThisBlogThis!Share to TwitterShare to FacebookShare to Pinterest

I'm quite certain that the designers of these garments expect no additional clothing to be worn over them--at least, not for long--and in one of three events:
1) Bedrooms
2) Strip clubs
3) Events featuring hired strippers.

I don't know about where you are, but up in my bit of the world, there's no light coming in from outside. No streetlights and heavy curtains. When it's time for an interlude with the Missus, and I turn off the bedroom light... Well, having one of those guys with the traffic wands to get me around the laundry, over the cat, past the dresser, and into the bed; that'd be kinda handy.

But since The Boss says that's not an option, maybe I can get her to put approach lights on the Hanes Her Way.

I dunno. I can see a certain utility aspect for men during a late night run to the can. A quick push of a switch, and you don't have to worry about missing the target, or failing to see the seat is down and the fuzzy seat cover is in harm's way. Won't wake the gentler half that put the damned seat cover on the lid, either.

Maybe a strobe? Or a laser?