I guess that's one way to make a statement!


A New York artist has made a social and ecological statement by converting a Hummer to a propulsion system hardly envisaged by its designers. EGM Cartech reports:

An artist by the name of Jeremy Dean created something called “Back to the Futurama”, a statement to the current American consumer culture, the auto industry and the economic recession. Dean figured that the biggest impressions he could make for his “Back to the Futurama” would be to turn a Hummer H2 into a horse carriage, and that’s exactly what he did. 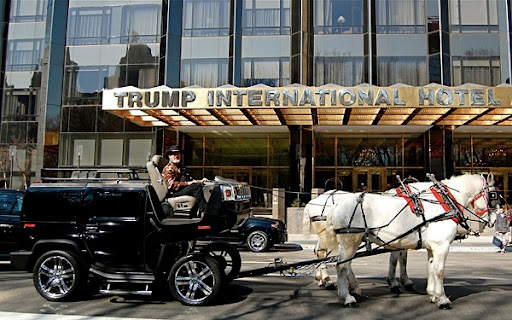 Jeremy says that the project was inspired by the Great Depression, at a time when people could no longer afford gas for their vehicles and hitched them to horses, creating “Hoover Carts.”

“I was fascinated by the Hoover Cart story and the image I saw in my mind of the re-imagined vehicle, this ultimate coping mechanism, and it seemed to me then, as it does now, a monument to the absurd, as only something utilitarian done in prolonged crisis can be,” Jeremy says.

His 1,800-pound car made its public debut in Central Park, pulled by two horses named Diesel and Dean.

There's more at the link, and at the artist's blog.

Here's a video put together by the artist to illustrate his project.

I'm not sure I'd agree with all his opinions, but he's certainly devised an eye-catching and original way to make his point. For that, kudos to him.

My first thought was, how many horses to drag an 8000# Hummer down the road...