I've written before about the centuries-old tradition of the annual Gloucester cheese roll races in England. Well, it seems that the health and safety bureaucrats have poked their unwelcome noses into yet another area. The Daily Mail reports:

For nearly two centuries, runners and spectators have gathered on a steep Cotswolds hill for the Whitsun cheese rolling. 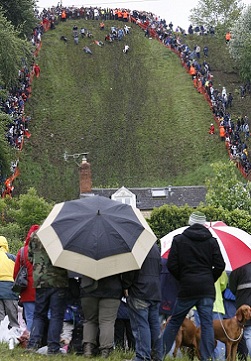 The rough and tumble spectacle sees daredevil competitors chase a 7lb wheel of Double Gloucester down the 200-yard incline in one of Britain's most eccentric traditions.

But organisers have been forced to cancel this year's event because of health and safety fears.

There are dozens of injuries every year among the men and women who hurl themselves down the hill in a bid to catch the cheese, but these are mainly minor.

However, the sheer number of people flooding in to watch the event has led to increasing concern from the police and councils.

The event site, Cooper's Hill in Brockworth, near Gloucester, has a capacity of around 5,000 people.

Last year roads for miles around were blocked by traffic trying to get to the event and finding nowhere to park. The chaos led to calls for an overhaul of the event.

Eighteen people were injured last year. This was described as 'low' by St John Ambulance, though ten of the wounded were not competitors but spectators.

Yesterday regular competitors reacted with disappointment to the cancellation.

Robin Hammond, of the Really Exciting Adventure Club, said: 'I do understand the issues about the crowd but wish that the local authorities had worked harder to ensure that we don't lose another part of our English culture to issues of crowd health and safety.'

Organisers say the cheese-rolling will return in a revised form next year.

I'm very glad I don't live under such bureaucratic soullessness. For Heaven's sake, people who enter this sort of event know the risks, and accept them! Surely it's not for some bureaucrat to dictate whether or not they should participate? As for the crowd control, I'm sure something could be worked out - advance ticket sales? Control of access roads? There are many alternatives, used by many event organizers all over the world. To cancel the event instead of finding creative solutions is a wimpish way to deal with so long-standing a tradition.

Anyway, since there won't be a race this year, here's a video clip of the 2009 event to pass the time.

And here's a video from a brave soul who wore a helmet-mounted camera on the way down!

I'm afraid of what will happen when the English get sick and tired of being treated like children.

GOD, I wish someone would do something about it.

Soon, it will be deemed to dangerous to EAT the cheese.

When the government owns you it can tell you what you can and cannot do! You are a cog in the productive machinery. We CANNOT allow a cog to expose itself to potential damage. A broken cog is a useless cog! Now stop the risk-taking and get back to work. Do not disobey this order from on high, or your cogdom shall be revoked. Cheers slaves.