A train I'd love to ride!


It's reported that China is proposing a high-speed rail link that would cover the more than 5,000 miles between Beijing and London in only two days.

Rail expert Wang Mengshu, from China's Academy of Engineering, said: 'We are aiming for the trains to run at 215 mph.'

The new service will not be arriving in Britain just yet, but the Chinese are hopeful it could be here within ten to 15 years.

China already has its own high-speed railway network, and is negotiating to extend this to up to 17 countries.

Mr Wang said most of the countries already at the negotiating table are in south-east and central Asia. The talks involve a trade of resources for technology. Many of the countries are under-developed but mineral rich.

China has proposed three highspeed railway projects, although the specific routes have yet to be decided.

The first would potentially connect Kunming in southern China, with Singapore via Vietnam, Thailand and Malaysia. Another could start in Urumqi in northern China and go through Kazakhstan and Uzbekistan, and possibly end in India.

The third would start in China's north-east and go north through Russia and then into Western Europe.

Though the project may have a bumpy ride with security issues such as illegal migration, smuggling and visas, the ambitions of the world's most populous country are rarely derailed.

China is spending £480 billion [just under US $720 billion] on domestic railway expansion, aiming to build nearly 19,000 miles of railway in the next five years.

And it boasts the world's fastest train, the 250 mph Harmony Express [shown below], which speeds 660 miles between the cities of Wuhan and Guangzhou in three hours. 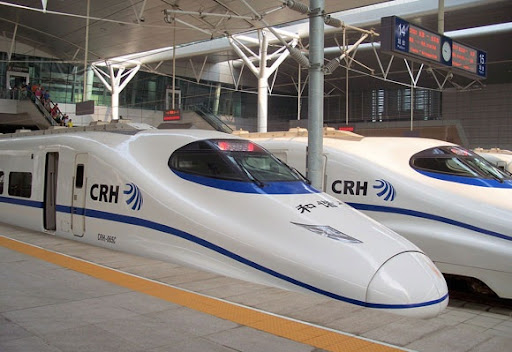 Now that's a train ride I'd like to take! To cover 2,500+ miles every 24 hours, allowing for a few stops in major centers to pick up passengers, means that a speed of about 250 mph would have to be maintained. Would that be a fast train ride, or low flying?

I hope they aren't going to build it in China, or it may not make it to GB even once.

Still, it'd be a magic ride.
Flight is fast, but boring as heck.
A train trip like this would be amazing, particularly if they don't lay the track across the Gobi or some other similar flat scorched earth!

Better 250 down low than 500 way up; having the ground handy makes it look like you're going much faster than you are.

I wonder what the chances are of the trains disgorging Chinese troops one day instead of passengers?

What Anti-Bubba said. My experience with the PRC's quality control methods doesn't exactly fill me with confidence...