The Daily Mail reports that a collection of some 200 World War II propaganda posters, issued by the British Ministry of Information, is to be auctioned on Tuesday.

Examples of the famous 'careless talk costs lives' warning are among a newly unearthed and rare, mint condition collection of 200 posters - sized A1 and A3 - produced by the Ministry of Information. They lay gathering dust in an old printworks for years until a worker took them home.

After his death, a relative took them to an auctioneers to be valued.

The posters - described by the Imperial War Museum as a 'once in a lifetime find' - are expected to fetch up to £160 per set of four when they go under the hammer.

Roy Butler, senior partner at the auctioneers, said: 'After the man passed away, a relative brought them into us, asking if they might be worth selling. I said "absolutely".

'They are quite a find, and as minty as can be. I can remember seeing a quite a few of them myself during the war.' 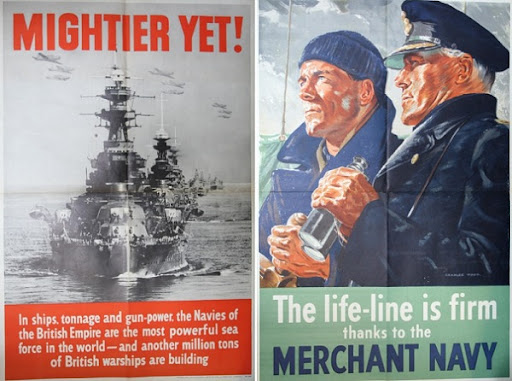 Richard Slocombe, senior curator at the Imperial War Museum in London, said that the find seemed to be a 'unique case'.

He said: 'There are instances of singular posters turning up in peoples' attics, but to have this number turning up in pristine condition is almost a once in a lifetime event.'

They were designed by the Ministry of Information during the Second World War to boost morale at home.

There's more at the link, including many more photographs of the posters. More can be seen at the Web site of the auctioneers, Wallis & Wallis of Lewes, England. (Search their site using the phrase 'HMSO Poster Collection WWII'.)

Seeing the photographs of the posters brought back memories of my childhood. Mom and Dad married during the war, and they had various articles and illustrations of these posters at home. It was a bit like a time-warp seeing some of them again! There aren't many left alive today from their generation, but I'm sure this article and the pictures will have brought back many memories. They seem amateurish today . . . but times were simpler then.

The most dramatic war poster I have seen is Norman Rockwells "Let's give him enough and on time". Rockwell is well known for his home front poster's, this one is a different class-
at the front line, on a black tropical night, a weary, torn-up machine gunner is firing a Browning watercooled .30, surrounded by a pile of cases.
- I suspect it was inspired by the horrific night battles on Guadalcanal.