A battleship-size cannon - on a tank???


Through a series of unrelated searches today, I came across a 1950's Soviet self-propelled cannon that dwarfs anything of its kind I've ever seen before.  It's the 2B1 Oka cannon, with a bore of no less than 420mm. - 16½ inches!!!  Even the legendary Iowa class battleships had only 16" guns (406mm)! 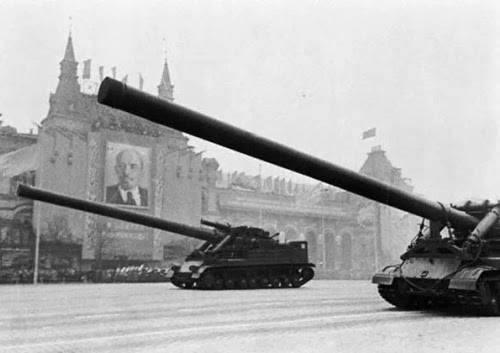 This behemoth's barrel was 20 meters in length, meaning that it was 47.6 calibers long (i.e. the length of the barrel divided by the bore diameter;  this is similar to the main battery of the Iowa class battleships, which had 16" guns with 50 caliber barrels).  It fired a projectile (shown below) weighing 750kg (1,650 pounds) over a distance of up to 45 kilometers (just over 28 miles). 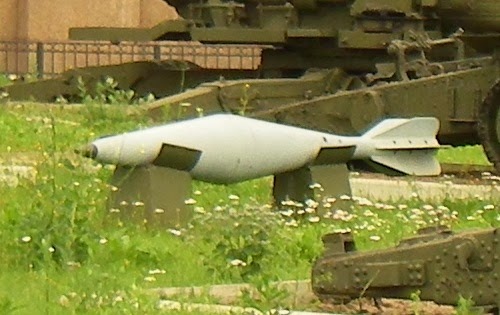 The Oka was basically just a cannon on a chassis.  It had no turret or other protection for its crew when in action, and carried no ammunition itself - it would be loaded from a support vehicle.  It had mammoth hydraulic suspension and support systems to cater for the immense weight of its gun, as can be seen by closer examination of the breech area (visible below) and the suspension (see bottom picture).

Firing the colossal cannon produced enormous stresses on the vehicle, which proved very unreliable as a result.  Wikipedia reports:

Due to its complexity of loading it had a relatively low rate of fire - 1 round every 5 minutes. Field tests showed various drawbacks of the entire design (the recoil was too strong for many components - it damaged drive sprockets, tore the gear-box away from its mountings, etc.) and the sheer length rendered it incredibly difficult to transport. 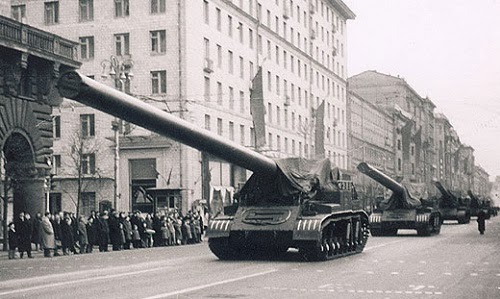 Further development was halted in 1960, by which time tactical ballistic missiles had been developed that had a longer range, delivered a more deadly payload, and were far more reliable than this lumbering monster.  Only about 20 had been built.  At least one is displayed today in a Russian museum, with its enormous shell on cradles in front of it.  (Image courtesy of Wikipedia.) 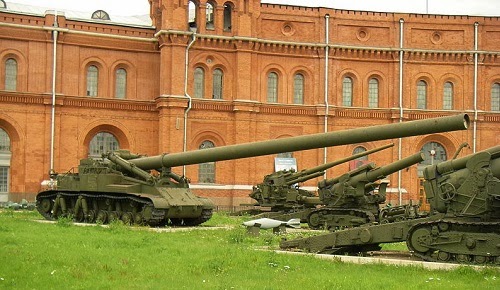 It amazes me to see a battleship-size cannon on a tank chassis.  I don't see how it could ever have been made to work . . . but the very fact that someone not only conceived of it, but actually built it, is astonishing in itself!  You can read more about it here, if you're interested.

Given what the Soviets mind worked it was most likely built just for show.

A really big cannon on a really big chassis, hmmm, sounds a tiny bit familiar. Another scifi writer, (name rhymes with dingo) used a giant mobile cannon in one of his series of novels. But back in the non scifi world, the projectile looks nothing like any cannon projectile I have ever seen. Maybe it was in a sabot? I don't see any of the bands to engage the rifling, and I don't see any flat surface for the gas to push against.

@John: I think it was a smoothbore cannon, and functioned more like a giant breech-loading mortar. That shell looks very like a conventional mortar shell in some ways, so I presume the propellant charge would have been attached in a similar way. For examples, see images in this Wikipedia article: http://en.wikipedia.org/wiki/Mortar_%28weapon%29 .

The Soviets allways had a penchant for what was called "Gigantomania". The had an inferiority complex so vast that no matter what the other guy produced they HAD to make one that was bigger. If it worked or not was not even a consideration. It only had to fire(or work) once to reach it's goal.----Ray

Just because you can, that doesn't mean that you should.

This weapon made total sense at the time, just was outrun by lack of funding and technical expertise as well as superior emerging technology (i.e. rockets).

1. Lots of trouble miniaturizing nuclear warheads for tactical use in the 1950s. The USA's first weapon was a 280mm cannon; looks like the Soviets could initially only get one down to 420mm.

2. In conventional war, the Soviets lost Sebastopol in 1942 due to the German's use of super-large calibre railway guns. So moving a super-calibre gun on a tank makes it more tactically useful, if you can get it to work.

I remember seeing a pic of the Missouri firing a broad side. Nine 16 inch guns going off at the same time. It was from the air so you could see the ship going sideways from the recoil. It would be a killer to have one hooked to a ground based system.

Give it to the Russian to make something that was not needed just because.

This is definitely more like a breech-loading mortar than a cannon. You can see how thin the barrel is in some pictures. The entire vehicle+gun weight of the 2B1 Oka is 55 tons, but the 16"/50 Mk. 7 naval rifle weighed 133 tons all on it's lonesome.

Fighting the last war in a sense. IF that could have been made to work, including not only the firing issue but the logistics problems...I daresay it would have been useful on sections of the eastern front in WWII.
Also, what a lovely propaganda statement to the masses in a military parade!

the Iowa class ships did not move sideways when firing. That's been refuted by the experts.
Not nearly enough energy to move that much mass, especially with all that surface area buried in the water. It would roll on its beam ends before it would move sideways.
I think what you were seeing was surface ripples from the vibration and muzzle blast made from firing.

The Iowa class don't move sideways when the main guns fire. As noted by Will, there's not nearly enough kinetic energy involved. To make it even less likely, if you're looking at one of the most popular images of the main guns firing (the top-down view taken in the 80's), you're actually only seeing one gun fire from each turret...look closely at the gas plumes.