A classic example of political ideology versus objective analysis is playing out over a book about California.  'Taxifornia' is described as follows on its Amazon.com page:

Californians are victims of the heaviest taxation in all of America, and those high taxes are now steadily destroying the state’s economy.  Tax-and-spend liberals who are in control have created a state that taxes and regulates more than any other state in the country, and have engineered a rotting economy with among the highest unemployment of any state in the nation.  Its high taxes hurt all Californians by making the state too expensive for business to turn profitable.  Business flight has become endemic.  California’s over-regulation of businesses depresses employment in the state.  A widely accepted tenet among liberal politicians, political science academics, and the media in California is that no development at all is a good thing.

It is a state that educates the worst but pays the best to its teachers, a place that is widely considered by most CEOs to be one of the worst locations in the nation to run a business, where local governments are going bankrupt, and where an out-of-control public employee pay and pension system threatens to gobble up and divert almost all available taxpayer resources to a point where cities and counties simply cannot afford to pay for police, fire, or road maintenance anymore.

California has an outdated environmental policy and an energy policy that makes the state almost totally dependent on one source of power:  imported natural gas.  It is a place where the public employee union worker who controls traffic in the Bay Area Rapid Transit District maintenance yard in poverty-stricken and near bankrupt Oakland is paid more annually than the Chief Justice of the United States Supreme Court in Washington, D.C.

The first thing I noticed is that the author blames California's woes on 'tax-and-spend liberals'.  This is true prima facie, but it's not the entire truth.  Both major political parties in California have advanced a tax-and-spend agenda.  Sure, the present party in power there (Democratic) must carry the can for present policies;  but don't forget that the previous governor (a Republican) was equally guilty of spendthrift behavior, and Republican elected representatives have voted for similar policies on numerous occasions.  Even if in recent years they appear to have repented of such behavior, I've no doubt that if they ever find themselves in power again, the temptation to spend other people's money to shore up their political fortunes will prove as irresistible to them as it has to the Democrats.

The second thing I noticed is the comments from readers (either real or purported) of the book.  Of the ten reviews posted at the time of writing, six are five-star;  four are one-star.  There are no two-, three- or four-star reviews at all.  A clearer indication of partisan perspective couldn't be desired.  Those damning the book with one-star reviews clearly approve of the current California government and administration.  They're not assessing the book on its merits at all - only on the basis of their preconceived value judgments.  Those praising it don't appear (on the basis of their comments) to be as dogmatically prejudiced, but there's doubtless an element of that at work too.

I've no doubt that the author's thesis about California being a 'failed state' in many ways is accurate.  We've discussed the subject in these pages on more than one occasion.  However, I wish he weren't so quick to blame liberalism alone.  Let's not forget that the real boom in US government deficit spending began during the presidency of (Republican) Ronald Reagan, and subsequent administrations, both federal and state, have taken their cue from him: 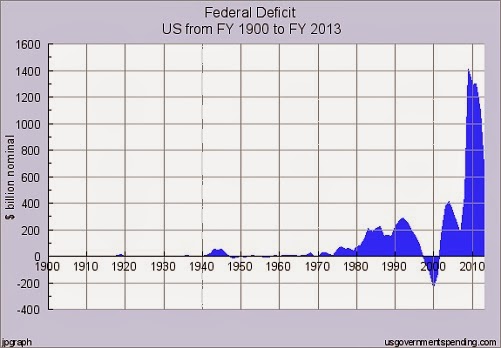 California's merely the best illustration (for now) of what happens when the philosophies and politics of 'big government', the 'welfare state' and statism become dominant.  It's a warning sign, and a prediction of how this entire country will look unless we change course now.  Liberalism is merely one symptom of those larger problems, which are not exclusive to left-wing or progressive views.  Just witness the actions of the Republican-controlled Congress in passing the latest omnibus spending bill, with its still-outrageous spending levels, to see what I mean.

Neither Republicans nor Democrats have the answer to our present situation.  Both parties are in it for what they can get out of it - not for us, and not to look after our interests.  The sooner more Americans wake up and realize that fact, and do something about it, the better.

Blaming the deficit spending of the Reagan era on Reagan is a bit... Off?

Remember, he was dealing with an effective Democrat majority in Congress, primarily in the House of Representatives where the budget is supposed to be created. Much of what is blamed on Reagan in terms of deficit spending is more accurately laid at the door of the Congressional majority that essentially blackmailed him into that spending in the first place.

It's all of a piece with the same Democrat mentality that used the first President Bush's compromise with them as a campaign point. He only raised "new taxes" because that was the only way to get something through Congress, and they promptly stabbed him in the back with it when he ran for re-election.

You can blame the president all you like for the waste, but in the final analysis, unless that president's party is also controlling congress at the same time, he's really just the fall guy for the idiots who really wrote the bill. There's not all that much he can do about it, no matter how much the media and pundits want to blame him.

You want fiscal sanity? Pay attention to who goes to Congress. The presidency can't really do much more than try to influence things, and unless he's got iron-clad control over what Congress does, his influence is going to amount to the same amount of control a cowboy has over a stampede of cattle.

Please note that I didn't blame President Reagan exclusively for the increase in deficit spending. I merely pointed out that it began during his presidency. Yes, of course Congress and the Senate had their share of blame in the matter.

Let us not forget many of CA's firearms control laws originated with then Governor Reagan.

A firm I represented moved to Texas from SCal. The president told us, even factoring in all the costs of moving, the firms first year savings were in the $800,000 range. (ATK Remanufactured Engines).

Too many of the bastards. We need to channel Mahatma Ghandi and just go on strike. Not sure how to do it and it is just and idea. Let me think on this.

Around 2000, CA decided to enhance their tax income by adding a surcharge to those who had an income of $1m or more. At that time there were about 3k taxpayers in that bracket. 1k of them left the state. The state reported that they broke even on the lost taxes, since the added tax revenue equaled what had bailed out of the state.

Of course, they never commented on the money lost to the local economy, when they took their pocketbook, and possible businesses, to some other state.

Recently, they did it again, although I don't have any figures available. It would seem it is a requirement that all politicians have no long term memory. Idiots.

California is eating itself from the inside... And when nothing is left but the husk, then who pays???

The author was right when he wrote "...tax and spend [i]liberals[/i]. There are few really conservative politicians in California, and Schwarzenegger was NOT one of them.