Here goes with another blast from the blogosphere.

Murphy's Law has a great video of Jimmy Stewart looking over a venerable DC-3.  I've flown uncounted thousands of miles in those planes across Africa . . . many, many memories.

Matthew over at Straight Forward In A Crooked World has some excellent advice for teachers (and students, for that matter) over how to cope with a threat in the school environment.  Excellent stuff, and well worth reading - particularly if you, or any of your family, works or studies in that environment.  This man knows whereof he speaks.

The Miller brings us this spectacular adaptation of an RV into a Zombie Apocalypse bug-out vehicle. 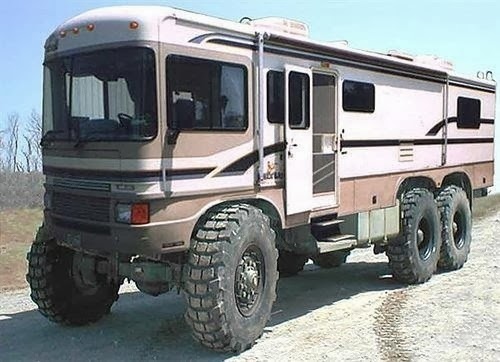 Karl Denninger goes off at the influential folks gathering for the World Economic Forum at Davos.  Here's a sample.

Amazing crap coming out this morning from Davos on bubblevision.

I didn't catch the jackass's name but I did catch the comments -- that we (the US) need immigration reform because we don't have the people here that we need for economic progress.

That's utter and complete crap, but what's worse is that to the extent the claim is true it's self-inflicted injury and all of these jackwads over there that are making the claim are part and parcel of the reason that the condition exists.

First, let's have some facts, shall we?  There are 12,385,000 more people of working age (16-64, inclusive) today than there were in September of 2008.  America is not suffering from a contracting workforce.

Glenn Reynolds brings us some time-honored time management advice.  I've seen it many times before, but it's always good to be reminded of basic reality like that.  Very useful.

Speaking of Glenn Reynolds, Francis Porretto cites him in a very insightful article dealing with 'Propaganda and Education'.  For example:

A great deal of the criticism of American education stems from the weak correlation between one's acquisition of a college degree and one's subsequent occupational attainment. There appears to be a widely held assumption, explicit more often than not, that a college education's primary purpose is to ready those who pass through it to perform economically.

In historical terms, that's a very recent emphasis. And there's a very good chance that it's at the heart of what's "wrong" with American higher education.

On the same subject, Matt Walsh thanks God he wasn't college material.

Something has to change. Listen to me on this one. Something HAS to change. This can’t continue. It is not a sustainable model. There are millions of kids with no assets, no plans, and no purpose, taking out enormous loans to purchase a piece of paper they’ll likely never use. It can’t go on this way.

This is madness. And there’s only one way to stop it: don’t go to college.

Don’t send your kids to college.

If they aren’t actively pursuing a career that fundamentally requires a college degree, don’t encourage them to go.

Finally, Daniel Greenberg slips the knife between the ribs of the educational elite with his usual inimitable style in an article titled 'Academics In Wonderland'.

Academia is a magical world where nothing is truly fixed and everything exists on belief. Change the belief and you change the reality. It's a meta-world that has a certain fanciful appeal for intellectuals, but little relevance to the real world where things do not change because the theory does and where outcomes are hard and real and the consequences of a bad theory can mean lives lost.


Ouch!  Go read all three articles.  They're worth your time.

Dr. Grumpy has a series of tips for drunk drivers - one driver in particular.

Captain Capitalism notes that in terms of socialist attempts to 'transform' Western capitalism, 'the parasite will never be bigger than the host'.  True, that - or, as Margaret Thatcher famously observed, "The problem with socialism is that you eventually run out of other peoples' money".

Ace Of Spades has an excellent analysis and rebuttal of the arguments of a self-styled 'expert', pointing out that "experts themselves do not recognize the limitations of expertise, and need to be reminded of them".  So true!  Highly recommended reading.

Old Retired Petty Officer asks, "What do you call a psychic dwarf on the run?"

Not to be outdone on the comedy front, Old NFO brings us a selection of classic Rodney Dangerfield one-liners.

That's all for this week.  More soon.

I was a passenger in a DC-3 from Miami to Key West Naval Station, carrying KW 7 Orestes key cards down there for an HF shoot from MCAS New River. It was an experience. That was in 77, so I guess the old ones are all in museums now.