However, I've been following with great interest the development of hyperspectral imaging and its application to military reconnaissance and sensors.  It's almost ready to hit prime time, although the initial sensors using it will be big, very expensive, and a bit too sensitive for most battlefield conditions.  (We've discussed one of them in these pages before.)  I'd give it a few years at most before they develop into something small and portable enough to be mounted on most combat vehicles, and incorporated into night-vision goggles and weapon sights. 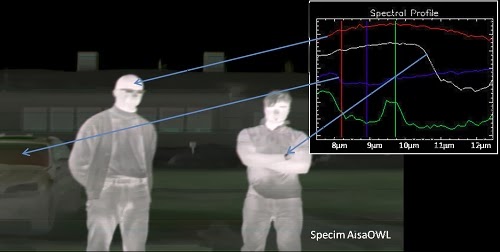 This technology would mean that visual or infra-red spectrum camouflage would become largely irrelevant on a high-technology battlefield (although, of course, it would remain very useful when not confronted with such sensors).  We've already seen that smartphones and even eyeglasses can be converted into night vision devices.  How long will it be before hyperspectral imaging technology devolves to common electronic appliances in the same way?

Flir has announced a thermal imaging "backpack" for the iphone. List price is $350. I am eager to see field reviews and may end up getting one for myself. http://www.flir.com/flirone/

Broadside.net has a nice cartoon commenting about the worth of optical stealth:
http://www.broadside.net/2013/M131202-48.htm

Funny but I recall reading that during WWII color blind individuals were used to spot camouflaged materials or sites.

It's an arms race. Camouflage is losing at the moment, but as these sensors become more available, I predict that camouflage will be adapted to fool them.

As my "Minecraft" playing kid would say, "Bedrock armor."
If it's totally passive, then it will be interesting to watch developments. If it's active, depending on the reflected light from a beam on the system, then it's making the user a target.