Here's this week's roundup from the blogosphere.

Vox Day points out that the USA is now effectively a police state.

The USA's spying program is ALREADY much worse than Nazi Germany, the Soviet Union, or even East Germany. The gloves are coming off. One can no longer reasonably pretend that the USA is anything but an imperial police state wearing an increasingly thin quasi-democratic, faux constitutional veil.

Remember this the next time you dismiss something as conspiracy theory or claim that a government agency couldn't possibly keep a secret from the American people. The real NSA conspiracy against the American people is much more extensive, and has been around longer, than even the hard-core conspiracy hunters suspected.

The question is, what are we going to do about it?  Far too many Americans seem all to willing to roll over and play dead in the face of this catastrophe to the constitution.  I'm not.  The oath of office I swore said, amongst other things, that "I will support and defend the Constitution of the United States against all enemies, foreign and domestic; that I will bear true faith and allegiance to the same..."

That oath has no expiry date.  Neither does the Constitution.  Those two realities mean that giving up and 'knuckling under' is not an option.

Greylocke links to a picture essay showing that you can't afford to be sick in America.  Here's one example of why not. 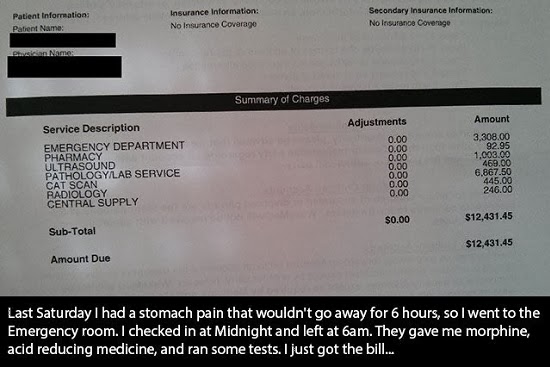 Divide that total by at least ten to get the true costs involved - and even those are inflated.  Blame EMTALA, a dysfunctional medical system, and (lately) Obamacare, which has only made all the existing dysfunctions even more dysfunctional.

I'm sure many of us are familiar with the old joke about political systems being explained by cows - for example:

CAPITALISM:  You have two cows.  You look after both of them and sell the milk at a profit.


I grew up knowing a fairly limited selection of them.  Well, it seems the list has grown awfully long since my teenage years . . . and Mr. Garabaldi has them all!  Go read, and enjoy.

Borepatch informs us that Linux Mint is a worthwhile alternative for those looking to upgrade from Windows XP, for which Microsoft will soon cease support.  I may have to try installing that on an older machine, and see how I like it.  I'm certainly not impressed with Windows 8.1 - in fact, I'm thinking of 'retrograding' back to Windows 7 . . .

The Art of Manliness has a very interesting guest post on how to obtain an undergraduate degree by 'testing out' for some or even all of the credits required.  I hadn't known that the US tertiary education system would allow you to do that.  The author claims you can save tens of thousands of dollars (even to the point of graduating debt-free), and several years that would otherwise be wasted on conventional courses, if you do it that way.

The same blog also has a very useful article on study tips and techniques.  I've completed four graduate and post-graduate qualifications, and I can tell you, I wish I'd known some of those techniques while doing them!  Highly recommended reading for everyone studying towards a degree, or taking any course at all, or who may have friends or relatives doing the same.

Commander Zero links to a blog post about an attempted 'bug-out' in an emergency situation that went seriously awry.  In this case, very fortunately, no-one was killed or injured;  but if the same thing were to happen again, who knows?  There are valuable lessons to be learned here.

Tin Can Assassin is on his way out of Kalifornia to a freer part of these United States (although that freedom is under threat everywhere, as noted in the first linked article in this post).  In parting, he tells his boss, his fellow workers and his customers just what he thinks about them.  (It's not complimentary!)

I note that he passed through Jennifer's part of the world on his way out.  Hey, TCA, if you pass through central Tennessee, drop me a line.

In a glimpse of the seamier side of law enforcement, Shooter describes how the pornographic novel 'Fifty Shades Of Grey' seems to be leading some 'ladies' to do things in public places that were best performed in private.  Sounds like "Ewww!" moments to me . . .

Three articles about the economy and economic policy caught my eye over the past week.


All three articles are well worth reading in full.

Finally, American Mercenary discusses 'Why the collapse is coming, we can't do anything about it, and we can't get people fired up about liberty'.  He's not very hopeful about the future.  Neither am I, but I am hopeful that we can stave off collapse and sustain something viable until the worst of the problems can be fixed.  Others, of course, regard that as wishful thinking.  I guess we're going to find out who's right, and probably sooner rather than later.

That's all for this week.  More soon.

I recently needed a "new" laptop, but settled for a used / refurbished on solely because it had Windows7.

Moral: The more Microsoft improves things, the worse they get.

If you don't like Linux Mint, Ubuntu Linux is very user friendly.

And I really hope that we are wrong about the future. But hope is not a plan, and it sure isn't a method to achieving your goals.

I switched to Linux about 3 years ago... No regrets. On the rare occasion something gets screwy, a simple google search will give you the solution.