The Battle of Rorke's Drift was fought on January 22nd/23rd, 1879, immediately following the Battle of Isandlwana, Britain's worst-ever colonial defeat against a Black tribe in Africa.  The disaster of Isandlwana rocked the Empire, and the British authorities grasped at the relatively minor fight at Rorke's Drift and the furious fight put up by its defenders as a countervailing episode of heroism.  Eleven Victoria Cross medals (Britain's highest award for gallantry in action) were awarded for the encounter there, the most ever awarded for a single battle in British history. 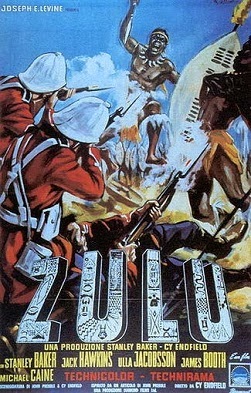 Fifty years ago, a film was made about the battle.  'Zulu' was an instant hit all over the world, and has achieved cinematic immortality among war movie buffs.  Some say it's Britain's greatest war film.  As the Telegraph points out:

Zulu is very much of its time. Thematically, you could say it’s roughly a Western, only with British soldiers for cowboys and Zulus for Indians. Baker and Endfield acknowledged as much: because many of the 700 Zulus hired as extras for the film had never been to a cinema before, the two men set up a projector in order for them to watch a Western starring Gene Autry. After that, the Zulus understood their precise role – to make lots of noise and fall over when shot. (They were reportedly paid for their work in cattle.)

Baker and Endfield could just as easily have put on 55 Days at Peking, which was released in 1963 and dramatises the siege of the foreign legations’ compounds in Peking during the Boxer Rebellion. Or The Alamo (1960), with its siege and gripping finale. Khartoum, another imperial era epic, was released a couple of years later in 1966.

Zulu, however, is a superior film to them all – which is why so many of us watch it every Christmas at home. Indeed, its extraordinary impact was highlighted this week by a museum curator, Bill Cainan, in Brecon. There, at the regimental museum of the Royal Welsh, the mementos of the battle are on display, including 10 of the 11 Victoria Crosses won at Rorke’s Drift. Mr Cainan is trying to prevent the museum’s closure.

He says: “Zulu is both a blessing and a curse. If it wasn’t for the film, it would be another forgotten foreign war.” But, he admits: “It’s a curse because most people seem to think it’s a documentary, which of course it isn’t.”

Thank goodness for that. Zulu is a story of real-life heroism seen through the lenses of Victorian propaganda and Hollywood epic cinema. It may not be truthful – but, my God, the result is thrilling.

If you're one of the few who hasn't seen the film, it's available in its entirety on YouTube (thanks to a copyright slip-up in the 1990's, when certain editions were published free of restrictions).  Even if you have seen it, you may not know much about how it was made:  so I'll embed this vignette here.

The film wasn't shot on location at Rorke's Drift, but about 90 miles away, because permission couldn't be obtained to mess up the battlefield - an historic monument - in order to film there.  I've visited the actual battlefield several times, and also that of Isandlwana, a few miles away.  They're peaceful now, with nothing much to disturb the silence . . . but there's a lot of blood in that soil.  The Zulus (who lost many more warriors killed in both fights than they slew English soldiers) regard both places as haunted.  Their sangomas say that the ghosts of the slain can still be seen there on the anniversaries of the battles, and that 'those with ears to hear' can still hear battle cries and the screams of the wounded and dying.  I wouldn't be at all surprised.

In closing, I'll just note that the Zulu's expertise with assegai (stabbing spear) and shield has remained as strong as ever - at least, among the rural tribes.  During South Africa's long internecine conflict that led to the end of apartheid and the advent of democracy in 1994, I had occasion to observe Zulus carving up their opponents on several occasions.  The only way to stop them, today as in 1879, is fast, accurate shooting with an effective firearm before they get within stabbing range.  Once they're 'up close and personal', your chances of survival are . . . shall we say, less than optimal.  The sibilant, hissing shout of "N'gidla!" ("I eat!" or "I have eaten!") as the Zulu warrior twists his assegai blade in the stomach of his victim (a favorite target) and pulls it out, bringing the intestines with it with a sickening, sucking, slurping noise . . . I'm here to tell you, it's a ghastly, fearsome sight and sound.

One of the best war movies ever.
As I recall (w/o looking it up) the assegai was also called the 'iklwha' - which was the sound it made upon withdrawal as you aptly described.

Fun fact: the Zulu spear can punch through chain mail.

@Anonymous: That's right - the iklwa is the short stabbing spear, as opposed to the longer throwing spear. However, both are part of the assegai family, and that term is used interchangeably for either type of spear.

I read "The Washing of the Spears" a few years back. I had very little knowledge of the area history before that. Dreadnought is another good book that discusses the Boer War in depth (although the book is more about the lead up to WW1)

Brings to mind "The Defence of DUFFER'S DRIFT", the classic of small unit tactics written in story form by Captain E. D. Swinton.

Available as free PDF - one source is:

Peter - I'm sure you're familiar with this, any comments?

Oh, yes! "Duffers" is a very well-known book in South Africa (usually to amused Boers who enjoy the bumbling British attempts to get things right).

For those who haven't read it, see:

At the link you'll find a summary of the book's contents, plus a link to a full online version at Project Gutenberg. Recommended reading.

Zulu is probably my favorite war movie. I was thinking about writing up the battle again this year, then forgot to do it on the anniversary. Shame on me. Happy you did so, will act as my reminder to order Zulu from Netflix and try to get my son to watch it. Nice post.

Very interesting site with a lot of information about: the battle, the VC awards (includes statements about the battle by they who received the VC), the myths surrounding the battle and so on. See:

wow, 50 yrs? I remember going to see this in the theater in the UK with my grandparents. Theater was packed. Funny now that I think about it, can still see the inside of the theater and remember the movie having an intermission. But I can't remember going to see any other movie at that age. Interesting how it made such an impression on me. BTW i would have been about 6 when it was released. Thanks for the reminder of one of my favorite movies!

Always loved this movie. Not necessarily accurate in the details of the characters, but it renders the legend very well.