The People's Cube has two hilarious articles on so-called 'low information voters' or LIV's - those who cast an uninformed, generally ignorant vote for people, policies and political parties about which they know and/or understand little or nothing.

BIASED: If you have a weird friend who goes to church and her parents are still married, that's what they are.

ECONOMIC STIMULUS: It's like Whitney Houston upping her dosage to get the same high, always needing to use more and more to "chase the dragon."

PUBLIC EDUCATION: Think Memento. Remember how the guy in the movie learned to go through life and fight enemies by relying on snapshots, notes, and tattoos? Public education does that on a national level as a free service.

QUAN-TI-TA-TIVE EASING: Remember Leonardo DiCaprio in Catch Me If You Can, and how he printed his own checks? Well, that's what the Treasury secretary, Tim Geithner, does. It's really cool.

TRILLION DOLLARS: This is a silly number. If someone says: "The U.S. national debt has topped 16 trillion," take it easy. Remember how Jeffrey Dahmer was sentenced to fifteen life terms while having only one life? Once you owe more than you can pay, numbers stop making sense. Anything above that is free money; spend it fast so you can get more.

The second article, 'Low Information Voters:  Adding Faces to the Voices', takes things (allegedly) said by LIV's and puts them in pictorial form.  Here are a couple of examples. 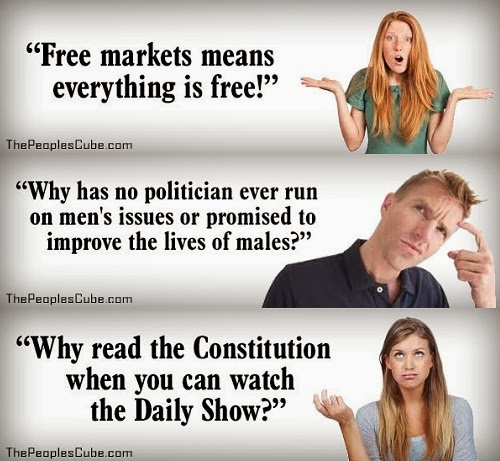 (If you don't already know it, The People's Cube is a great satirical Web site.  It's worth revisiting frequently for a good laugh!)

It may be satire, but it's entirely too close to the truth to be funny. Sigh...