Does anyone speak kamikaze?


If you do, a museum in Britain would appreciate your help.  The Flight International editor's blog reports:

The Fleet Air Arm Museum is trying to find the meaning of insignia on a rare Japanese Second World War Ohka 2 – which has been hanging from its rafters for over 30 years.

This model is to feature in a new display to commemorate the war in the Pacific.

The markings are on the left hand side of the aircraft and the hatch cover; there is also a cherry blossom, from which the Ohka takes its name, a Japanese symbol of flowering and rebirth.

If you think you might be able to help in the translation of the Japanese insignia on the Ohka, please contact the museum’s curator of aircraft, Dave Morris, at: davem@fleetairarm.com.


There's more at the link.  Here's the museum's Ohka aircraft.

And here's a graphic from the August 1945 edition of Popular Mechanics, showing how the Ohka (code-named 'Baka', the Japanese word for 'stupid', by the US armed forces) was carried to its target. 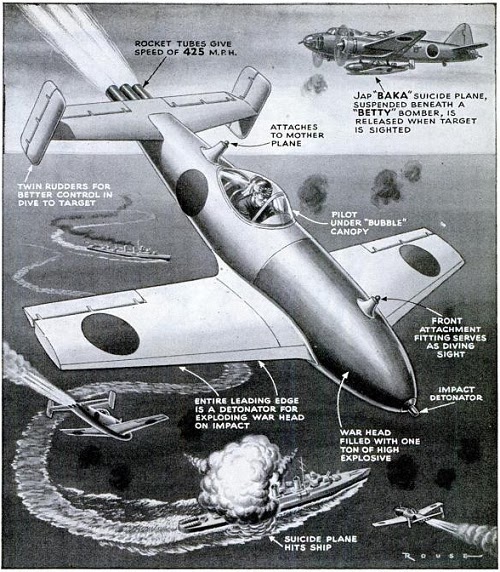 US forces captured a number of Okhas on Okinawa in 1945.  Here's a short video clip showing one being dismantled for examination.

If the invasion of Japan had gone ahead, the US Navy would have faced hundreds, perhaps thousands of these aircraft as it sought to deliver the landing force to its beachheads.  Fortunately, that wasn't necessary, as their speed would have made them very difficult targets for US defenders.

There are very few of these aircraft still in existence.

The suicide attack was the single most effective weapon in the history of navel warfare. Sinking of taking out of action more ships in the shortest time than any other weapon EVER. Had the Japanese put more than 10% of there Kamikaze fleet into action they may well have slowed the drive across the Pacific into 1946 or '47.

The only Kamakaze I know is "Look, there is American carrier..." I know...bad pun. Seriously though, I still get with those people that think that we shouldn't have used the ATOM bomb and my reply was " do you know the casualty forecast for an invasion? We would have had to eradicate them as a culture to beat them, when you see pictures of Japanese civilians practicing with bamboo spears to stick American GI's that is the mindset of the people we were dealing with.

The Kamikaze was an early form of guided missile. The guidance system was a human pilot rather than an electromechanical robot.

One of the reasons I think that Hiroshima & Nagasaki were so effective was that it showed the Japanese government that we really were willing and able to eradicate them as a culture.