A (literal) blast from the past


Reader Sherman W. drew my attention to this article.

Seven decades after thousands of "balloon bombs" were let loose by the Imperial Japanese Army to wreak havoc on their enemies across the Pacific, two forestry workers found one half-buried in the mountains of eastern British Columbia.

A navy bomb disposal team was called and arrived at the site Friday in the Monashee Mountains near Lumby, B.C.

"They confirmed without a doubt that it is a Japanese balloon bomb," said RCMP Cpl. Henry Proce.

"This thing has been in the dirt for 70 years .... There was still some metal debris in the area (but) nothing left of the balloon itself."

The forestry workers found the device Wednesday and reported it to RCMP on Thursday.

Proce, a bit of a history buff himself, accompanied the men to the remote area and agreed that the piece appeared to be a military relic.

The area was cordoned off and police contacted the bomb disposal unit at Maritime Forces Pacific.

It was a big bomb, Proce said. A half-metre of metal casing was under the dirt in addition to approximately 15 to 20 centimetres sticking out of the ground.

"It would have been far too dangerous to move it," Proce said. "They put some C4 on either side of this thing and they blew it to smithereens." 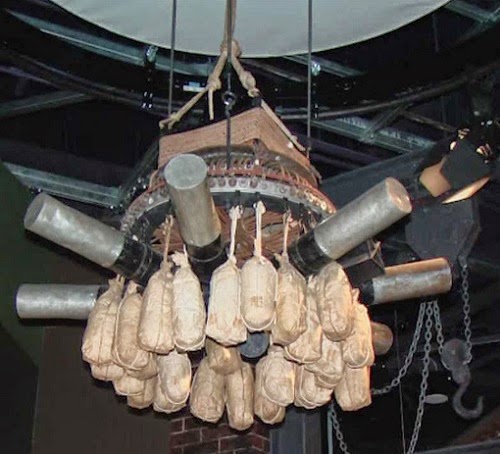 
Japan launched over 9,000 balloon bombs against North America during World War II.  Some 300 made it across the Pacific to land all along the coast from Canada to Mexico.  Only one caused fatalities, on May 5th, 1945.  Their payload was mainly incendiary rather than high explosive bombs, designed to cause fires in America's forests.

Here's a World War II US training film describing the bombs, with actual footage of them.

It's amazing that one was found almost intact some 70-odd years after being launched.  A tip o' the hat to Sherman W. for providing the link.

They'll be finding them for years to come... Some estimates say up to 1000 made it to the US and Canada...

Shows how often that stretch of forest gets visited.