One of the most fascinating operations of World War II


I note that the last surviving participant in Operation Mincemeat, one of the most fascinating (and successful) intelligence operations of the Second World War, has died.  The Telegraph reports in her obituary:

Patricia Davies, who has died aged 93, was the last surviving member of the clandestine group in Naval Intelligence that in 1943 launched Operation Mincemeat, a brilliant subterfuge that significantly altered the course of the Second World War.

The plan of Operation Mincemeat ... was to drop a dead body in the Mediterranean off the coast of Spain and hope the Nazis would find it. The body was dressed as a Royal Marines officer, and was attached to a briefcase containing a series of official-looking but faked letters indicating an Allied plan to push back against Axis forces in southern Europe by invading Greece and Sardinia — and not, as expected, Sicily.

The Nazis took the bait: believing the false information to be true, they diverted massive forces to Greece, enabling a successful Allied invasion of Sicily.

Patricia Davies ... worked in the Admiralty, first for Ian Fleming (author of the James Bond novels), who was assistant to the Director, and later in a secret division called 17M, located in a small stuffy room in the basement of the Admiralty building.

“We were all in on the plot,” Patricia Davies recalled in one of the interviews she gave in later life. “We were enthralled by the whole idea, and did everything we could to elaborate it.” 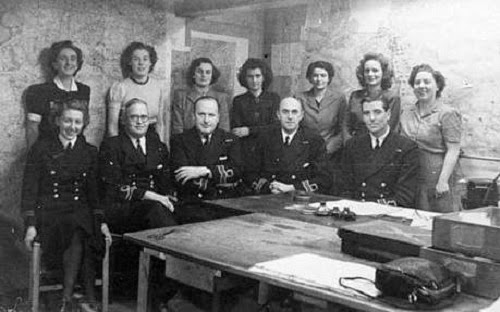 The required veil of secrecy was never penetrated. “We were all terrified by the Official Secrets Act, and thought we’d end up in the Tower of London if we gave anything away,” she said. Her parents thought she was working as a filing clerk. The secrecy lasted only as long as necessary: a few years after the war ended, Montagu published his own account of Operation Mincemeat and it was made into a film, The Man Who Never Was (1956). “Churchill was kept informed, but he did rather dine out on it, which was another reason the story began to come out,” Patricia Davies recalled.

Her personal contribution to the preparation of Major William Martin was to address, in her fine handwriting, the envelope (to General Sir Harold Alexander, C-in-C, Middle East) containing the false Allied invasion plan.

On April 30 1943 the body of William Martin was deposited in the sea off the east coast of Spain from a naval submarine. It was intercepted by a fisherman, brought to Spanish authorities, and before long Nazi intelligence became interested. After an agonisingly long wait (mainly due to the ineptitude of Nazi spies), the contents of William Martin’s briefcase became known to the Nazi command, even allegedly reaching Hitler’s desk. Eight divisions were diverted to Greece, leaving Sicily barely defended.

Although for much of her life post-war she talked little about Operation Mincemeat, she was in demand as an interviewee before and after the publication of Macintyre’s book. Asked by a German television interviewer what she did during the war, she replied, with characteristic sharpness: “Well, I tried to ensure that as many of you were killed as possible.”

I first read Cdr. Montagu's book during my youth, and remember being enthralled by the cloak-and-dagger operation.  Mincemeat remains one of the most successful intelligence deceptions in any war in recorded history, rivaling the fabled Trojan Horse in its effectiveness, and was a major reason why Allied casualties during the invasion of Sicily were so light.  If you haven't read the book, I highly recommend it.  (The movie's not bad either, but it takes some dramatic liberties with the story.)  Ben Macintyre wrote a more recent book about Operation Mincemeat, updated with newly-declassified information.

Judging from the last sentence quoted above, Ms. Davies seems to have been an unreconstructed patriot all her life.  I'm sure Churchill would have approved.  May she rest in peace.

A great-uncle of mine, who died a few years ago in his late 80's, was part of the American forces that invaded Sicily. They indeed encountered much less resistance than expected, and apparently Operation Mincemeat was at least partly responsible for that happy state of affairs.

What wasn't quite so happy is that my great-uncle spent the remaining two years of the war, right up to VE-Day, in almost nonstop combat all the way up the boot of Italy. He spent every night for these two years in a tent, on or near a battlefield, and was never out of range of enemy fire. He was one of the very few soldiers in his unit to make it through the war alive and uninjured.

My favorite WWII spy story is that of Juan Pujol Garcia:

Not to one up, but there were some darn good spy tales to come out of that war.