Running out of sand?


I'd never thought of sand as being a scarce resource, but according to an article in Der Spiegel, to an ever-increasing extent it is.

Never before has Earth been graced with the prosperity we are seeing today, with countries like China, India and Brazil booming. But that also means that demand for sand has never been so great. It is used in the production of computer chips, plates and mobile phones. More than anything, though, it is used to make cement. You can find it in the skyscrapers in Shanghai, the artificial islands of Dubai and in Germany's autobahns.

In 2012, Germany alone mined 235 million tons of sand and gravel, with 95 percent of it going to the construction industry. The United Nations Environment Program (UNEP) estimates global consumption at an average of 40 billion tons per year, with close to 30 billion tons of that used in concrete. That would be enough to build a 27-meter by 27-meter (88.5 feet) wall circling the globe. Sands are "now being extracted at a rate far greater than their renewal," a March 2014 UNEP report found. "Sand is rarer than one thinks," it reads.

At times, the paucity of sand has even forced workers to put down their tools at construction sites in India and China. It has also halted fracking-related drilling in the United States because the process requires that sand be mixed in with the water pumped into the ground in order to keep open the fissures from which gas is extracted.

"Sand is like oil," explains Klaus Schwarzer, a geoscientist at Germany's University of Kiel. "It is finite." Western Carolina University's Young adds, "If we're not careful, we'll run out of sand." 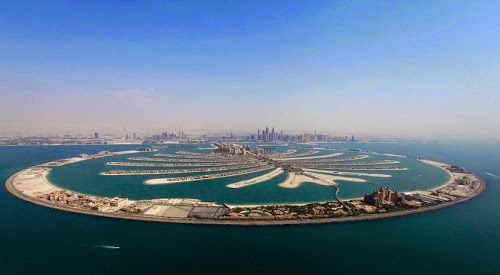 In 2012, the environmental organization Global Witness released satellite images showing how Singapore has expanded its territory by 22 percent over the past 50 years. The group provided evidence that the sand used to enlarge Singapore came from neighboring countries like Vietnam, Indonesia and Malaysia and had, in some instances, been extracted illegally. One country after the other then issued a ban on mining sand. Singaporean dredging vessels responded by setting course for Cambodia. Phnom Penh responded by likewise banning exports of the resource.

Sand is similar to fossil fuels like natural gas, coal or oil: It takes thousands of years to form -- for rock to be naturally ground down into sand with rivers washing, grinding and breaking up stone on their long journeys to the sea. But the global population is growing, and since the start of the economic booms in Asia and Africa, sand doesn't even make it to the oceans anymore in some places. It often gets fished out before getting there.

One might think that the Arab Peninsula, with its high sand dunes, would have the largest reserves, but desert sand isn't suitable for every purpose. It contains a surfeit of chalk, clay and iron oxide. And while the countries have considerable amounts of marl, quality sand is also necessary to produce cement. Paradoxically, then, the desert region is suffering a shortage of sand.


There's more at the link, including a photo gallery showing the expanding use of sand.

The article's well worth reading in full.  It shows how sand is used far more widely than most of us know.  For example, I had no idea that 'fracking' requires sand as well as water, or that countries were dredging sand from off the coasts of other countries - sometimes without bothering to ask.

Seems funny to think someone will make a fortune in artificial sand, sand substituting technology, and ways to use low quality sand in high quality sand pursuits. As pointed out the Saudis have sand it is just not the right sand, unless some one comes up with a clever way to use it.

Bahrain is doing that (dredging) to increase the size of the island... And the problems here in the states with coastline are only getting worse for LACK of beach sand due to erosion.

Don't we have some big deserts that can spare a bit of sand? Or y'know, a lot of sand?

Isn't there an old joke about leaving a government in charge of a desert, and six months later they announce a shortage of sand?

Sand and gravel is a larger industry in terms of dollar value than gold and silver mining combine. One company that bills itself as a gold company, NovaGold, generates most of its cash-flow from its sand and gravel operations.
The biggest problem is transportation. Lots in the desert, far from cheap and easy transport (shipping), hence the dredging operations stripping coastlines.

I recall reading that when the Germans were building the U boat pens in France they were short of sand. Ended up taking the beach sand and washing it (salt in concrete in not a good thing). Different tasks require different qualities in the sand. I believe there is a place in Wisconsin that supplies all the fracking sand (which holds the fissures open allowing the oil to flow)

When my father retired, some 30 years ago, he was hired by the rock products association to survey usable sand and gravel deposits in the western US. The conclusion then was that we were beginning to run low.

The global price of feedstock for construction-quality sand is stable, which makes me question any claims of scarcity. I'd guess it's a logistics cost/return issue. I know that in in Staten Island's sand dock, there's usually 3-4 30-40,000 ton deliveries a year to intermix with rock salt and halite for winter road use, and the city times off-season deliveries by charter rates for bulk shipping. No way in hell that's an accident or thoughtful cost-saving measure. I'm guessing that the sand is worth less than the charter cost most of the year.

From everything I can see with the bulk shipping trade, logistics, not supply, is the bottleneck. Bakken fracking is too new and the growth rate too close to asymptotic to have developed a stable infrastructure for logistics, so, to me, that's a poor example of a trend. I'd imagine that Henry Ford had similar problems early on.

Right now, bulk shipping rates are in the toilet, so if that ever returns to normal, which is questionable (owning bulk carriers is a fantastic way to lose money for investment banks looking to write off losses for tax purposes), I don't see the logistical issue being put to bed any time soon.

The problem with comparing sand to petroleum is that the U.S. seems to be the only country left in the world that believes in the "fossil" fuel myth. Petroleum is abiogenic. The Nazi scientists discovered that back in WWII. You need to read Jerome Corsi's book, "Oil Conspiracy." It is well documented.

Just like glo-bull warming and over-population, a sand shortage myth is just one more thing to add to the Agenda 21 plan to get us used to the idea that 6.5 billion people need to die for the benefit of the global elite.

also, Saudi built new whole islands. who is wasting the sand? I am sure they will point the finger at the US and fracking but it is the Saudies and the PRC.