I came across a Web site for re-enactors of the Roman Legions, which is quite interesting to military history buffs.  Among the articles it contains is this one on the bread made by the legionaries - and how to make it yourself today.

Although known since the 5th millennium BC, there are evidence that bread start to become a very popular form of food in Rome only at the end of the Second Punic War. It is indeed in quite a short period of 25 years, between -200 and -175 that the first public bakeries (fifty) make their appearance in Rome. At the same time Cato the elder, who has also participated in a victorious military campaign in Spain, explains how to bake bread under a "clibanus"(pottery in the shape of a bell). Moreover, we find evidence proving that at that time both Romans and Carthaginians used clibanus as portable ovens like the type described by Cato. Etruscan models dated back to the 5th century BC show that this type of portable oven was already used in Italy for a long time. Ideally suited for baking military bread, it is also very easy to transport and use. The clibanus is thus the ideal instrument to cook bread in campaign.


There's more at the link, including lots of photographs illustrating legionary grinding-stones, the 'clibanus', and how the soldiers prepared their bread.  This is what the finished product looks like. 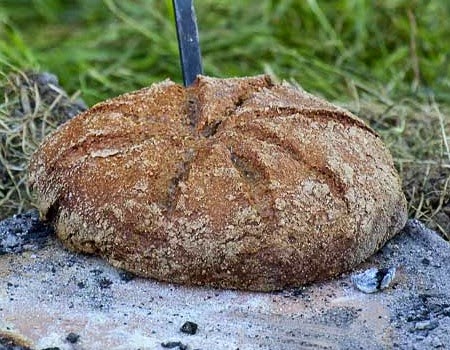 It looks very similar to what we called 'camp bread' in Africa, cooking it over fire-heated stones.  I'm on a low-carb diet at the moment, so I can't try that right away:  but soon . . .

Labels: Boys and their toys, Food and Drink, History, Interesting facts, Military
Email ThisBlogThis!Share to TwitterShare to FacebookShare to Pinterest

Yeah, this is killing me. I love cooking bread (and eating it, obviously), but I'm having great success on a calorie-limited diet, and need to spend my calories on protein to avoid that hunger feeling.

I'm going full Roman when I get home from sea, though. Gonna try this one, a pumpernickel, soda bread and hardtack.

You call that old? This is old http://www.aeraweb.org/lost-city-project/feeding-pyramid-workers/

I seem to remember that camp-bread in Africa involved liberal applications of ... beer (purely as a rising agent yer honour - well that and something, two or three bottles per slice was the remembered recommendation, to help wash it down too). I never had a hangover from a sandwich before!

I wonder did the Romans do the same? After all, everyone knows how effective pissed squaddies are in a ruck.

@Able: I think you and I may have been around a couple of the same camp fires from time to time . . .

Quite possibly considering I first had that gourmet experience courtesy of a bunch of Air Pollution I tagged along with doing COIN (way, way too long ago to admit, even to myself). Some generous member of the Budgie Club included a few cases of Castle in the resupply drops.

Being an experienced con-a-sewer (again way too experienced with Castle, Shake Shake, Scud, Tusker, Laurentina, Ngok and a few others my age causes me to forget … although there was definitely some Guinness variety that you needed a spoon to 'drink' too) I was carrying an original Galil (unlike your lots R5's). Why? … because of the bottle opener of course!

Nothing better than returning to the TB to be met with alcoholic bread, 'how do you want your impala steak Rooinek' and a few bevy’s – the only civilised way of operating in my book.

I'm still trying to find the recipe for the World War One "Trench Bread" One of my great grandfathers and a grandfather fought in WWI and my uncle showed me their letters when I was a kid and they both talked about Trench Bread and how it was easy to make. I was thinking it might be like the Revolutionary War pan bread or board bread but I'd like to get confirmation.