An advertising campaign showing a woman's breasts has been blamed for more than 500 traffic accidents in one day.

The massive adverts placed on the side of 30 trucks driving around Moscow showed a woman's breasts cupped in her hands with the slogan 'They Attract' across her nipples. 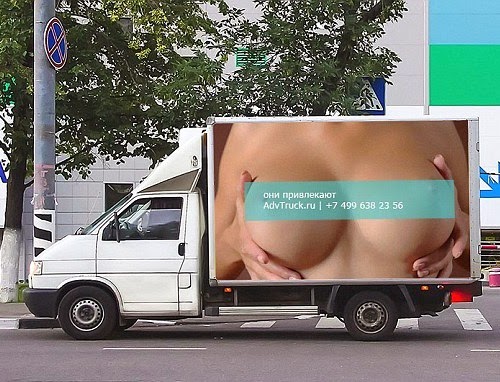 As the trucks trundled around the streets of the Russian capital, they left a trail of carnage as male drivers became so distracted they ploughed straight into each other.

A total of 517 accidents were reported.

The stunt, by an advertising agency specialising in mobile adverts, backfired after police sent out patrols to round up all the vehicles and impound them until the risque images could be removed.

Motorist Ildar Yuriev, 35, said: 'I was on my way to a business meeting when I saw this truck with a huge photo of breasts on its side go by.

'Then I was hit by the car behind who said he had been distracted by the truck. It made me late and left my car in the garage, and although I am insured I am still out of pocket.'

Furious drivers across Moscow have reportedly bombarded the agency with compensation claims.

What can I say?  Clearly, distracted drivers are failing to keep abreast of the situation . . .

After checking out a few of the vídeos relating to driving situaciones in Russia, one could conclude that it doesnt take much to distract 'em over there.

Kind of like the old observation test with an AK in the lap of a nude big breasted woman. When asked most testees list the woman in the picture but little else.

An yet women are surprise they get attention when the let the tatas free.

This falls under the bad ideas heading of advertising.

Sanford says this is what he calls an attractive nuisance. :D

Hey Peter,
You gotta admit, those are an attractive set of tata's. And there was a truck in the picture?:D

I tittered at your bon mot.

Men can be so hardwired and predictable. That form of advertising is truly taking an unfair advantage-almost as bad as putting chocolate and potato chips on an end cap to the fem care aisle.

Wonder how many of the car insurance companies will deny the damage claims?

Good sir, your epic pun at the end of this little article was so spectacular that I simply could not resist commenting!

But now that I think about it, being a fan of puns myself, I accept this as a challenge. ;)

Even so, amidst all the damage, I'm sure that some of those drivers are thankful for the mammaries. I mean memories! Memories! X3