Talk about "lucky to be alive"!


I missed this report when it came out in July, but ran across it today.

The accident happened on a road in the city of Qingdao when a large lorry carrying the container toppled over, shedding its load on to the car containing the two man and woman.

Emergency services were sure that nobody could have survived the crash and that it was simply going to be a grisly case of recovering crushed bodies from within the wreck. 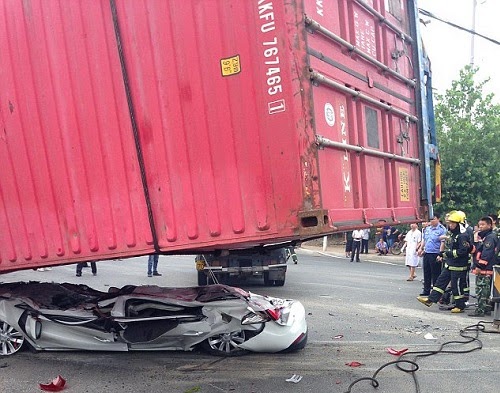 But as they set about their task, they heard a woman calling for help from within the twisted metal.

A stunning rescue operation involving a 100 tonne crane then got underway, and it was discovered the couple had only 60cm [2 feet] of space remaining inside their crushed car.

Incredibly the woman was easily pulled out the wreckage with little more than cuts and bruises, although she was subsequently taken to hospital to be treated for shock.

The man travelling with her was in a more serious condition and needed to be cut free from the crushed vehicle, but he too is expected to make a full recovery.


There's more at the link, including many more photographs of the rescue.

I hope both of them bought lottery tickets right away . . . with luck like that, they'd have been sure-fire winners!

Wow... Yeah, lucky does NOT begin to describe them!!!

Lucky they were. Even more so that rescuers and equipment were at hand.

I'd say they used up all their luck right there.

I agree with tweell.

That's amazing...I've seen too many accidents and crushed vehicles to have thought it possible . Thanks for the reminder that there's always hope...