"Into the valley of Death, Rode the Six Hundred"


One hundred and sixty years ago today the Light Brigade of British cavalry charged the Russian guns during the Battle of Balaclava in the Crimean War.  It suffered 278 casualties (killed, wounded and missing) out of approximately 670 troopers and officers who took part in the Charge, a casualty rate of over 41%.  335 of the Brigade's horses were killed in action, or so badly hurt that they had to be put down afterwards. 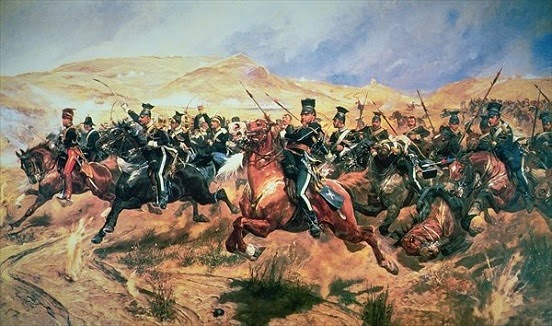 The Charge was, of course, a colossal mistake that should never have happened.  It was the result of confusion caused by badly worded orders, their confusing delivery, and different perspectives visible to the various officers concerned on different parts of the battlefield.  The war correspondent of the Times, William Russell, opined, "Our Light Brigade was annihilated by their own rashness, and by the brutality of a ferocious enemy."  Controversy over the Charge began almost as soon as it was over, and has continued ever since.

The Charge became legendary through the poem written about it by Alfred, Lord Tennyson.  If ever a unit was immortalized in words, it was the Light Brigade.

If my memory serves me it is also done by the band Iron Maiden in the song of The Trooper inspired by that poem and battle itself. Phenomenal work all around.

The charge may have been a mistake but probably would have been considered one of the bravest and most successful charges of history had the Heavy Brigade followed them for support as originally planned. Parts of the Light Brigade actually made it behind enemy lines and routed the Russians. However, once the Russians realized that the Light Brigade was so few in number, the Russians regrouped and counter attacked. They drove the Light Brigade back through the valley and back through artillery and infantry fire once again accounting for additional casualties during the retreat than suffered during the actual charge. Had the Heavy Brigade been there to lend support, it may well have been a grand victory for the English.

That same battle, Balaclava, graves us the "thin red line of heroes" the Kipling refers to.

I frequently quote Kipling or Lord Alfred Tennyson. The Light Brigade obeyed orders and rode into history and immortality.

The annihilation of the ANZAC forces at Gallipoli is an even more egregious example of bad orders leading to disaster.

Apart from the fact that more British Soldiers died at Gallipoli than Anzac forces I will not dispute that Gallipoli was also bad orders, but we don't whinge about it.
But the differance is as an Englishman is that the Charge of the Light Brigade epitmises what I am about at my core (or I hope) whatever the odds, whatever the oposition you will stand tall, stand proud and do the right thing.
And dispite overwhelming odds and high Casualties the Light Brigade did its Job no matter what.
And the sound of the words "Guns to Left of them, Guns to the Right, Guns to the Front of them the brave 600 hundred rode" makes me swell up with pride everytime.