Back from the dead - and a lot more deadly


Regular readers may remember that back in 2012, I put up a post about a new Indonesian trimaran patrol craft.  The first in class was launched, then burned to the waterline only a few weeks later.  There's video of the fire in my earlier article.

It seems the manufacturers haven't been mourning during the intervening years - they've been hard at work.  Today Ares published a very interesting article about where the design has been going.  Here's an excerpt.

In the competition for the most futuristic looking vessel at the Euronaval show being held this week in Paris I would put the clear front runner as the Fast Attack Craft (FAC) on the Saab stand. 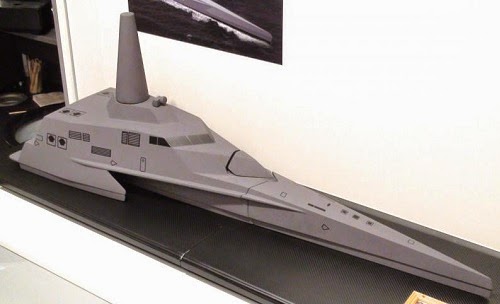 Designed for naval patrol, anti-piracy and surveillance missions in peace time the ship would be a missile ship to launch Saab's RBS15 Mk3 anti-ship missiles in war time. And for added interest the vessel has a fascinating design history.

The FAC is not entirely new. Based on a design by New Zealand's LOMOcean, the KRI Klewang for the Indonesian Navy was launched on Aug. 31, 2012. And was then completely destroyed by fire four weeks later on Sept. 29.

Some time after the fire, Lundin was having lunch with Saab and talk turned to combat systems. He apparently learnt more about them in an hour than he had from the Chinese in over a year. This convinced him that the next version of the vessel should be equipped with a Swedish combat system.

So Saab, LOMOcean and North Sea Boats worked together to redesign the top part of the vessel (everything above the trimaran hulls) around Saab's 9-LV combat system.

The FAC is equipped not only with anti-ship missiles but also the BAe Systems Bofors 40Mk4 naval gun.

Military and naval buffs will find this thought-provoking.  The new version of this patrol craft weighs only 245 tons, made entirely of composites.  It has a maximum speed of 28 knots.  It's far more powerfully armed and equipped, with a much more capable threat detection and assessment and weapons control system, than the US Littoral Combat Ships (of more than 10 times the displacement) that may operate alongside it (or, God forbid, oppose it) in the operating environment for which it's designed.  (Its missiles could sink the LCS from far beyond the horizon before the latter knew it was there - and the US vessel couldn't respond even if it detected it, because it has no long-range anti-ship missiles of its own.)  It's a stealthy design, making it hard to detect on radar;  look at the radar mast's non-reflective features, and the careful shaping of the superstructure (including a retractable cover over the gun turret). It's probably much better optimized than the LCS to protect littoral waters - and it probably costs only a small fraction of the US ships' price as well.

Makes you think, doesn't it?  Some good skull sweat went into this design.  I'd like to see it in the water soon.  It'd be nice to know that the Klewang didn't burn in vain.

245 tons? Anything over a modest swell, and that boat's going to be a charnel house inside if there's a fight to be had. At 4,000 tons, I get bounced around like the mixing ball in a paint can in anything over force 7 seas.

Semi-serious joking aside, It'd be a real challenge to work a non-traditional hull like that in a modest gale. The not-meant-for-open-water (trihull) variant of the LCS is reputed to be crank and prone to wild griping in a confused sea, and that's with all the added beef of a lot more mass.

Really, to me, with an asymmetric profile immediately above the waterline, these trihull designs are going to yaw and roll wildly when they're not head to the sea, and there's enough moment to push them bow down so that the wave-piercing bow is only stabilized on one side by a sponson hull.

It's like the America's Cup boats today. They're amazingly fast, sink on a whim and in a sea, can't compete with wooden sailboats built a hundred years ago. As interesting looking as these gator navy boats are, it's hard to see them as useful beyond swimming distance to shore.

@Paul: I'm not sure that this hull will be as unseaworthy as you expect. In the first place, it's a patrol craft, not a seagoing vessel - it's designed for operations in shallow waters, where it can take shelter from storms behind islands or in harbors. It won't be hundreds of miles out on the Pacific Ocean, far from land.

As for seaworthiness, the catamaran and trimaran designs are becoming more and more prevalent in the Pacific. Australia developed the basic design a couple of decades ago, and many other nations have adapted it - see, for example, China's Type 022 missile craft, which are catamarans rather than trimarans, but their hulls follow the same basic design concept. There are over 80 of them in service, which suggests they don't have too many problems with the weather they encounter - otherwise they wouldn't have been built in such numbers.

I agree that in an Atlantic storm, things would be different; but the Pacific's not the Atlantic in terms of 'normal' weather.

so I have virtually no sea experience. The one time I was out on the sea we had waves breaking over the bow and hitting the bridge (a little less than 100 ' back)
This sea going ship would crash like a dead bird when the bow ran out over nothing*. ie when the wave passed the center of gravity and hoisted the stern.
I see a slight chance this design pitch poles, or does a pretty neat variant.
Remember its not to far off the English coast that oil rigs encountered "impossibly high waves".
*you should have heard the captain having been awaken when he got to the bridge. Lets just say none of those junior officers ever did that again.