Today was the first day of 'wild' weather we've had since coming to the Gulf Coast.  The wind began blowing up a storm during the night, and by morning warning flags were flying all the way along the coast, signifying dangerous sea conditions.  Intermittent rain began during the morning, and we've had thunderstorms through late afternoon and into the evening.

Since the weather wasn't conducive to doing things outdoors, we did them indoors.  Miss D. and I went through to Pensacola again to pay a return visit to the Naval Aviation Museum, specifically its balcony displays around the main exhibition hall.  They're fascinating vignettes of various aspects of naval aviation history, focusing more on the ships, bases, equipment and people than on the aircraft themselves.  For example, there's an in-depth look at the USS Enterprise (CV-6) of World War II fame.  She participated in more major actions than any other US Navy ship during that conflict, and earned 20 battle stars in the process.  How I wish the Navy had preserved her, instead of letting her be scrapped in the late 1950's!  If ever there was a single ship that epitomized the US Navy in World War II and the transition of the 'capital ship' banner from battleships to aircraft carriers, it was her.

Another exhibit illustrates life on Guadalcanal for the members of the 'Cactus Air Force' in 1942 (most of whom were Marines, with a few stranded Navy pilots and aircraft joining them on occasion).  There are gondolas and other components from balloons, blimps and dirigibles, commemorations of naval aviators awarded the Medal of Honor, and many other interesting displays.  For me, as a military history buff, the balcony section is just as interesting, if not more so, than the aircraft on and suspended above the main floor.

Miss D. and I were particularly interested to locate a series of plaques giving the names of the 'founding members' of the Naval Aviation Museum.  Those of you who've read Old NFO's books (The Grey Man - Vignettes or The Grey Man - Payback) may recognize the author's name: 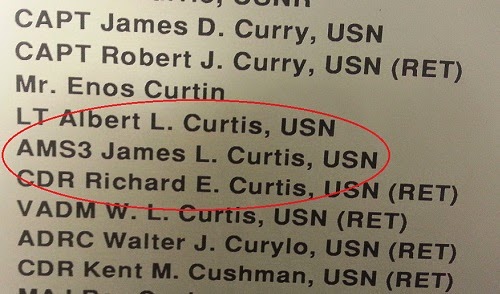 I note, too, that his contribution was made before he was commissioned, so he's one of the very few founding members who was serving in enlisted ranks at the time (if I read it correctly, he was then an Aviation Structural Mechanic Third Class).  Thanks for your support for one of my favorite museums, Old NFO!  Nice to see your name in lights, so to speak.

After our visit to the museum we took time to deal with a couple of car issues, putting in a new headlight bulb and having the air-conditioning system serviced (we've been working it hard on this trip).  We then met a reader of this blog, Michael Cravatt, for lunch, along with his wife and child (I don't normally name readers without permission, but he'd already posted an invitation using his name in a comment to an earlier post here, so I'm assuming he won't mind).  Thanks, Michael - we had a great time.  I particularly enjoyed your almost-five-year-old son's antics.  Kids are cute, aren't they? - unless you're their parents when they're throwing a frothy!

We came back to find the wind just as strong as ever, with yellow (Florida) and red (Alabama) warning flags flapping all along the coast.  Only the foolhardy were in the surf, and the beaches were largely deserted.  Rain and thunderstorms moved in for the rest of the afternoon, which spoiled our plans, so we've had a quiet rest of the day.

We have two more days of vacation, then on Thursday we'll head back home.  It's been a great time so far - exactly what we needed to de-stress and unwind, with lots of nature's beauty all around us, birds and other wildlife to keep us amused (including a young coyote trying to cross an urban street last night, quite unperturbed by the traffic and other human activity), and new sights, sounds, smells and tastes to explore.  I've particularly enjoyed having real, genuine sea-food once more.  I can't get used to the American habit of calling all fish 'seafood', even if the fish in question has never been within a thousand miles of salt water!  I grew up on a steady diet of sea fish, and I miss its denser flesh and stronger, saltier flavor.  This trip has offered many opportunities to rectify that de-fish-iency.

Labels: Idle chatter, Me me me, Other blogs, Warm Fuzzy Happy Stuff
Email ThisBlogThis!Share to TwitterShare to FacebookShare to Pinterest

One of my WWII history books is about the Enterprise.

Nimitz even threw his hat in the ring for preservation, to no avail. She was a grand ship.

@Grog: Yes, I have that book in my library as well. It's one of my favorites, along with Cdr. Stafford's other books.

Peter, do you have any of Edwin Hoyt's books? he authored at least 15. I have his book about Guadalcanal. And the "Thoudsand Mile War" by Brian Garfield is an excellent read.

@Grog: Yes to all. I have an extensive WW2 library. I find many of those who were there tell it much better than later authors, even though the latter may have more information thanks to the expiry of secrecy periods and so on.

Coyotes do adjust to traffic. I once saw a coyote standing in the middle of the southbound lanes of I-93 in New Hampshire, lined up on the center stripe and facing the oncoming traffic, waiting for a big enough gap to finish crossing. Another was found on Cape Cod, which means that he crossed the Cape Cod Canal, probably by just walking across on one of the two highway bridges that connect the Cape to the mainland.

Peter, did you think of this www.nationalww2museum.org ?

@Don: I know the WW2 museum - I've visited it. It's expanded since then, but I haven't been back to New Orleans for almost a decade.

Thanks for meeting us for lunch. It was good to finally put a face to two of the blogs I have enjoyed so much. If you are ever in this neck of the woods feel free to stop by. If we ever get up your way we will try to make time to get together.

Peter- There were quite a few of us E's up on that wall, and it was a damn good cause then, and even more so now! Glad y'all enjoyed the visit!!!