Seventy-five years ago today, on October 24th, 1939, the first nylon stockings went on sale.  The Telegraph reports as part of a picture essay:

Although stockings have been around for centuries - and were usually worn by men - the invention of a new synthetic material in 1935, patented by the chemical company DuPont two years later, changed the game for hosiery. According to lore, in-house scientists at DuPont had been calling the material “Duparon”, which stood for “DuPont pulls a rabbit out of nitrogen”. The company planned to market the product as “nuron” - which is “no run” backwards - but due to trademarking issues settled on “nylon”. DuPont made a conscious decision not to trademark the name in the hope that it would come to be seen as synonymous with “stockings”. When the first test sale took place at the company's Wilmington, Delaware, headquarters on 24 October 1939 -- 75 years ago today -- 4,000 pairs sold out within three hours.

DuPont’s vice president, Charles Stine, unveiled the world’s first synthetic fibre at the New York World’s Fair in 1939 in front of thousands of women. He said: “Though wholly fabricated from such common raw materials as coal, water, and air, nylon can be fashioned into filaments as strong as steel, as fine as a spider's web, yet more elastic than any of the common natural fibers." The women burst into applause in the belief that these stockings wouldn’t run, unlike the silk stockings they wore at the time.

It wasn’t until May 1940 that nylon stockings became available in stores. On sale for about $1.15 a pair - that’s about $20 in today’s money - the nylon stockings were more expensive than their silk alternatives, but were more resilient and lasted longer. Hundreds of thousands of brown nylons sold out almost immediately, and DuPont sold 64m pairs that year. DuPont sold $9m worth of nylon yarn in 1940 and $25m the following year. 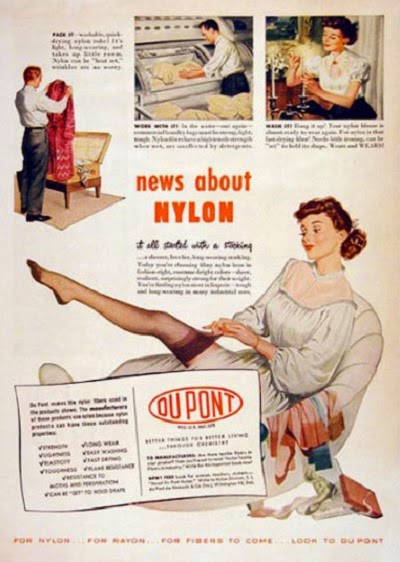 When the US entered the Second World War in 1941, manufacturing of nylon stockings stopped so nylon could be used to make parachutes, ropes, tents and other materials for the war effort. Women who couldn’t get nylon stockings on the black market drew seams on the back of their legs so it would look like they were wearing stockings. Cosmetic companies also started selling “paint-on stockings”.

The return of nylon stockings to the high street in 1945, when rations were eased after the war, led to queues that ran out the doors and down the block -- leading to “nylon riots” in some places. Some 40,000 women lined up outside a store in Pittsburgh that had 13,000 stockings, while a shop in San Francisco had to stop selling stockings after it was mobbed by 10,000 people. Demand stayed so high throughout the 1940s that DuPont demanded payment in advance for all purchases, even from the most reputable of accounts.


There's more at the link, including more images.

My mother used to reminisce about what she called the 'pulling power' of nylon stockings in Britain during World War II.  She complained that any 'Yank' serviceman could have almost any woman he wanted just by announcing that he had nylons from America, so great was the demand for them.  She was married by then and didn't succumb to temptation, but she can recall drawing a line down the back of each leg to make it appear, in the dim light of a restaurant or movie theater, that she was wearing nylons.  That was apparently a common thing at the time.

Joe Shivers, also of DuPont, was the man who brought us Spandex, the delightful fiber that reveals much about svelte yoga instructors and incompletely conceals people of walmart