I was astonished to read, not only that organizers held the Beijing Marathon today in severely polluted conditions, but that tens of thousands of runners actually took part regardless!  Conditions were so bad as to pose a real danger to health. 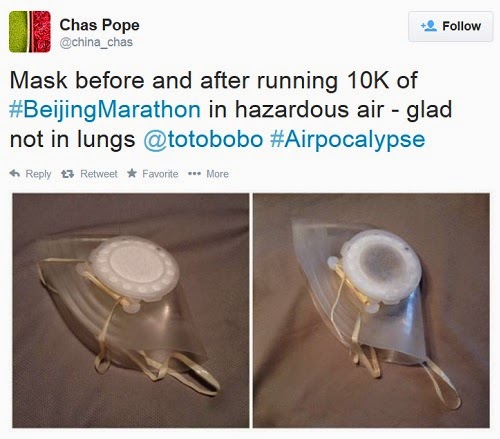 You can judge the level of air pollution for yourself from this video report.

I simply can't understand the mindset of the runners.  When you know that the particulate levels in the air are up to 16 times more than the maximum recommended limit for health and safety - when the city's own pollution bureau is warning people to stay indoors - how can you possibly justify breathing them deep into your lungs for hours at a time?  What's even worse, the particulates are among the most noxious out there - motor vehicle exhaust, factory chimney pollution, etc.  Knowing that . . . I'm sorry, but I feel as if these runners and I come from different planets.  Have they no conception of reality?  Am I wrong for expecting them to have better sense?  Readers, what say you?

Stupid is as stupis does.

The people who drive hybrid cars are responsible for that. That pollution is caused by manufacturers of all sorts, but one of the large polluters is the factory that makes the nickel foam that goes into electric and hybrid vehicle batteries.
The hybrid and electric vehicle claim of low emissions is a giant hoax played upon the green left.
America isn't becoming more environmentally friendly, we have simply exported the industry, the jobs, the pollution, and the profits to China.

One wonders how much of a choice they really had, to run or not run.

I have run 3 marathons, one in Hong Kong, and two in Australia.
Only a complete moron would have done so in China.
As the saying goes, 'stupid is as stupid does'.

If they're like the hardcore marathoners I knew when I ran, they'd run though blinding rain, freezing snow, or meteor storms. It's a lot of work to get up to those distances, and a lot of people will dodge bullets to get through the course.

The sanity of marathoners and triatheletes has been in question for quite some time.