A teaser for my readers


I'm working hard to complete Volume 4 of the Maxwell Saga.  Here's the cover, with a grateful tip o' the hat to Oleg Volk for his graphic design skills in putting it together. 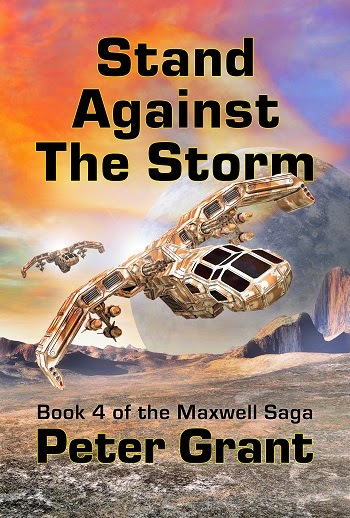 The back cover blurb reads:

For ten years, Steve Maxwell has played cat and mouse with the Dragon Tong, pretending to look for a missing jade artifact. They've given him favors and prestige, keeping close contact despite his rise in the military. All this time, it's been in his luggage, and he's been trying to find a way to give it back without getting killed if the truth got out.

Unfortunately, all good luck ends. Steve is stranded in a half-destroyed supply depot with a crew of Tong prisoners and a handful of local allies. He's the last obstacle in the path of local rebels and escaped prisoners trying to get off-planet.

Any sane man would cut and run, but Steve never learned to back down. No matter what the odds, he'll stand against the storm.


The holdup now isn't so much my writing as the promotional materials and publicity that go with launching a book.  Miss D. (who handles a great deal of the marketing) and I are finding it very difficult to line things up for a December publication, as many of those involved are either on holiday or busy with their own Christmas promotions.  As a result, publication may slip until early January.  I'd rather not miss the Christmas shopping season, but I've got to be realistic - it's better not to launch something half-baked.  I'd rather do a good job and get it right.

I'm also having a lot of fun planning Volume 2 of the Laredo Trilogy.  In it, the two series will come together, because Steve Maxwell is going to become temporarily involved with the Laredo resistance.  If I could figure out a way to categorize the book as both Laredo 2 and Maxwell 5, I would;  but that's not really feasible, so it'll be published as Laredo 2.  Steve Maxwell's adventures will continue later next year in another book, Volume 5 of the Maxwell Saga.

I'm hoping to finish the Laredo Trilogy next year, with Volume 2 to be published in March and Volume 3 in September.  I'm also planning two more Maxwell books, Volume 5 in June and Volume 6 in December.  That's a heck of a lot of work, but I'll do my best.  Thank you all for being enthusiastic readers.  It helps me to keep my nose to the grindstone.

Labels: Books, Me me me, Thank You, Writing
Email ThisBlogThis!Share to TwitterShare to FacebookShare to Pinterest

I'm looking forward to both!

Eager waiting for all of them. But with the troubles Not under your control) you are having getting this book out in DEC, Why are you doing it again?

Maybe shoot for Late NOV or just put in JAN.

I'm waiting eagerly for both of these. Good luck getting these out.

Oh, that typography... But I'm really looking forward to the story!!

I've enjoyed every book thus far, each being better than it's predecessor IMHO. I especially enjoyed the Laredo Trilogy's darker take on the galaxy you created (which I think is genius, btw). I'll be looking for each new release as they are available. Good luck!!

I will of course will wait with baited antici-----pation.(think of scene from "Rocky Horror")

@Cedar: The typography is more 'general' than 'science fiction', but the latter isn't my priority. The single most important factor in the typeface is that it be clearly readable at a thumbnail cover size of about 60x100 pixels, which is what Amazon uses for its 'also bought' lists. The text and the central cover image have got to be legible at that tiny size, otherwise a potential reader's eyes will simply glance over and past the thumbnail. That's why we've used the typefaces we have on all my books.

To see what I mean, here's the 'Stand Against The Storm' cover in thumbnail size:

I know, I looked at it in thumbnail. I'm not saying it needs to be more complex, just... not a font that you'd also use inside the book, if you follow. But it is nice and clear, and it is at least similar to the other covers. The art is great, by the way.

I'm looking forward to reading all of them!

Any word when this will be out?