Looks like things got a little hectic Down Under a couple of days ago.  Australian reader Snoggeramus sends us the link to this report.

A series of unfortunate events have led to a tour bus being bogged overnight on Fraser Island.

The bus reportedly drove onto the beach in an attempt to tow out a small plane that had become bogged, before meeting the same fate. 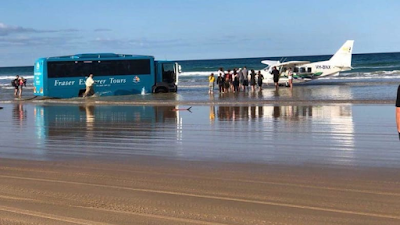 While the plane managed to get free, the bus was left on the beach overnight as the tide rolled in and tourists frantically unloaded their luggage and found higher ground.

Apparently the bus was freed after the tide went out, but it got rather wet in the process.  I want to know who thought it was a good idea to drive a bus full of tourists onto what was obviously relatively soft sand in the first place!

(The plane was obviously using the beach as a makeshift runway, something that's pretty common in isolated spots.  Miss D. has lots of stories of landing planes on beaches or river sandbanks to go fishing or crabbing in Alaska.  They're fun, particularly when bears get involved, as not infrequently happens in that part of the world!  However, most Alaskan bush aircraft wear oversized, fat tires that "float" on the sand, so they don't often get stuck.  From the photograph, it looks like that plane wasn't as well equipped for beach landings.)

Hahahahaha! Idiot. Oops, I should say the driver was not thinking clearly.

Sand is treacherous. Some beaches are hard packed and totally drivable. I remember the beach at Galveston being covered with cars. But there are places where the beach seems to be solid, but the tide comes in, raises the water table and the 'hard' surface dissolves.

Chuck,
I have a vague recollection that part/all? of that situation is due to the shape of the sand particles. The smoother, rounder the surfaces, the more it acts like quicksand, as it lacks any interlocking ability.

I landed a Cessna 150 on the outer banks of NC once. The sand was hard packed and the landing was as smooth as I had ever made. Taking off again was no problem at all - at least as far as the sand was concerned. The seagulls were another matter.

There's a scheduled flight in the UK (Barra to Benbecula IIRC) that depends on the plane landing on the beach, schedule depends on tides