What would Clay Allison have said?


Clay Allison was one of the most violent men and most feared gunfighters in the Old West.  One of his better-known sayings - later adapted as the epitaph on his tombstone - was "I never killed a man who didn't need it". 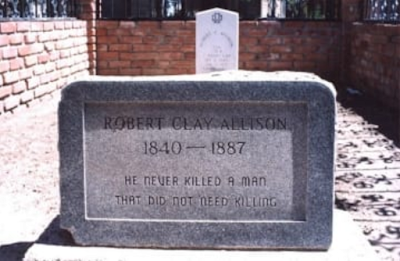 One wonders what he would have said about the infestation of pedophiles that are currently rearing their ugly heads in an attempt to make their predilections appear "normal".  A tip o' the hat to Gorges Grouse for the link.

I’ve been noticing a trend for the regressive left to defend pedophilia for awhile. Meryl Streep applauded Roman Polanski, while Whoopi Goldberg defending him drugging and sodomizing a 13 year old as not really being “rape-rape.” Not to mention the recent flood of creepy, unfunny child molestation jokes proudly made by the usual suspects of loud liberal mouthpieces…Michael Ian Black, James Gunn, and Sarah Silverman.

It’s clear there’s an attempt by Hollywood and the regressive left to normalize pedophilia throughout the years, and it’s unfortunately... officially arrived.

Trying to piggy back on current LGBT rights and the endless numbers of sexual preferences and gender identities made by the left daily, has given us the “MAPS” movement which stands for “minor attracted person.” Because every leftist narrative needs a misleading euphemism.

If you get confused trying to make sense of the perverse jargon, here are some definitions.

NOMAPS: It doesn’t mean they’re against it like you’d think, it means they’re a “non offending” non-contact pedophile, which they seem to think makes them moral.

NAMBLA: The North American Man/Boy Love association, their goal is to abolish all ages of consent

Nepiophile: Someone who’s sexually attracted to toddlers and babies


I wish I were kidding... but they’ve even come up with their own pride flag and symbol.

You see, these sickos are under the impression that it’s ok to be attracted to children so long as you don’t “offend.” Because that’s not a set up for failure or anything at all...

Once I started perusing Twitter to see just how bad these degenerates could be, I fell quickly into a rabbit hole of scumbags that DEFINITELY need to have “To Catch a Predator” look into them.


There's much more at the link, including many examples of such behavior from self-confessed pedophiles.  It's nauseating, but important reading, because these people are out there, and we need to be aware of them and the threat they pose.

I've had to deal with such people - far more than I would have wished - as a prison chaplain and pastor.  I'm here to tell you, there is no such thing as an "innocent" pedophile.  The tendency itself is sufficiently mentally deranged to produce a potentially dangerous individual, even if he or she has not (yet) acted on it.  You can take that to the bank.  It's true.

If you have children or grandchildren, or have friends who do, please make sure they're aware of these attempts to "normalize" pedophilia in the minds of the general public.  It's not normal.  It's abnormal, deranged, warped, twisted, deviant, and a very dangerous tendency.  Those espousing it should be treated as such.

I think I know what would have happened if any of them had tried to get close to Clay Allison's children.  A jury of his peers would have acquitted him on the spot, too.  In these more "enlightened" times, any parent taking the law into his or her own hands in such a way would probably face many years in prison for doing so.  The only remedy left to us is constant vigilance, and an absolute, total, irrevocable refusal to permit such people to persuade us, and society as a whole, that they're really harmless, kumbaya-singing, innocent little angels.

Sick subject we have to discuss, but thanks for the mention.

My kids are now all older but my wife has a day care and we have 6 under the age of two in the house.

If I see any evidence of that kind of behavior I will personally drill a hole in the cranium of the miscreant with some kind of percussive device.

You can bank on the fear for my life defense as well.

We used to lock up these people and we need to start doing that again. They are not misunderstood. Unless you are to weak to have any convictions.

There is no rehabilitating these monsters. Their effect upon their victims is something that lasts forever. And it is a disease that is passed down if not stopped completely.

This pushing of the pedophilia into the mainstream is horrifying, and must be stopped and I am at a loss as to how to stop it, other than by violent means.

Why? Because the same people that can justify socialism and make it sound good to a majority of the people are the same ones pushing this filth. And as God and religion has been devalued, this garbage has ascended, slowly, on the foundation of so many other loosenings of moral values.

And after this, will be polygamy. Which some tv channels are pushing already as a positive thing. Which it isn't.

Put them in the GROUND. I'LL sleep soundly, thanks....

It happens close to home. This was earlier this year in Texas:

A boy of 11, kidnapped from park, raped, with the intent of later selling boy as sex slave.

Note that the accused was allowed to make bail, despite what would seem a very real risk to the community.

Normalizing pedophilia has been the goal of the Left for decades. It is the entire point of the push for 'gay rights'. Those little boys just won't bugger themselves.

The only thing left is the push for legalizing child murder. Oh, wait...

...I dunno, those dirtbags making bail might not be terrible. Worlds a dangerous place...all manner of accidents befall high risk activities

"NOMAPS: It doesn’t mean they’re against it like you’d think, it means they’re a “non offending” non-contact pedophile, which they seem to think makes them moral."
---

Are they moral? If you define morality as not succumbing to evil acts, yes. I know Catholicism punishes impure thoughts as severely as the acts themselves; maybe G-d does too, but that seems too much for a mere human to achieve.

@Antibubba: Sadly, I can't agree, because pedophilia appears to be a mental compulsion almost as strong as the most severe drug addiction. I have never, repeat, NEVER encountered anyone with pedophile tendencies who managed to keep from "acting out", even in a minor way. It's one of those no-cure diseases.

It's not a question of punishing them because they haven't (yet) done anything. It's recognizing that their very orientation makes them potentially dangerous, far more so than a "normal" sexual orientation makes someone dangerous. If you go into the psychological and psychiatric studies of pedophilia, the worthwhile ones (i.e. those not tainted by political correctness) are unanimous on this point.