"The Pride of the Damned" is published!


The third and final book in my "Cochrane's Company" trilogy, "The Pride of the Damned", is now available on Amazon. 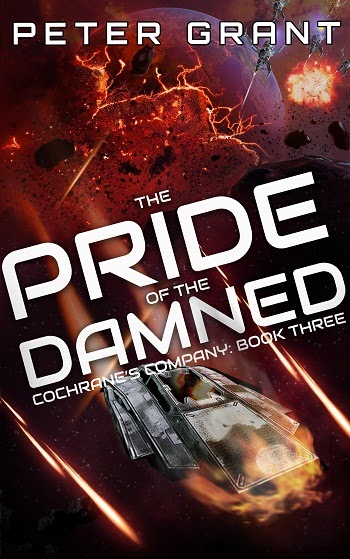 It's the climax of everything that has gone before.  The blurb reads:

The shadow war started as a simple contract to defend a system against asteroid thieves. The harder Andrew Cochrane and Hawkwood Security fought, the worse things became. Now they find themselves embroiled in an interstellar war with an entire mafia!

Worse yet, the proceedings are so profitable - not to mention bloody - that they've attracted the attention of some of the worst criminal organizations in the galaxy. If Hawkwood is to survive, it'll need all the wits, cunning and ingenuity it can muster - and the unwavering courage and dedication of its people.

The galaxy's not big enough for both sides. One or the other will go to the wall.


I hope you enjoy "The Pride of the Damned" as much as you have the first two books in the trilogy.  When Miss D. challenged me, last December, to consider the project, I had no idea how much work would be involved.  It's been exhausting, but also a lot of fun;  and you, my readers, appear to have enjoyed it, too, if sales figures are anything to go by.

I'm already hard at work on other projects, which you'll see come out over the next few months.  The first will be an omnibus volume of the first three Maxwell novels, which will include a brand-new story that won't be available anywhere else.  I'm also working on the third volume in my Western series, the Ames Archives, and the final volume in the Laredo War trilogy, as well as two short stories, a collaborative novel with a well-known author, and planning two new series in both the science fiction and fantasy genres.

Where's the idiot who said a writer's life was relaxed and easy?  I have news for him!

Zounds, Peter, you are taking measures to empty my wallet. In the vest possible way, natch. Any plans for a sequel to King's Chak9ioj??

@John Cunningham: I'm noodling on it. It may happen, but not in the short term.

Shut up and take my money!!!