All the fuss and bother over President Trump's meeting with Russian President Vladimir Putin in Helsinki is giving me a delicious case of schadenfreude.  The Deep State and its minions in the news media were so sure that they'd set things up in such a way that President Trump could not help but be embarrassed, or come a cropper in some way . . . and he outsmarted them all.  The current screaming and carryings-on are so over the top as to be obvious to anyone with half a working brain cell.  Let's examine things in the cold, hard light of reality, shall we?

First off, President Trump does not trust the US national security apparatus - and, in his shoes, neither would I.  It's the same people who allowed former President Obama and his administration to co-opt security organs, processes and agencies for partisan political purposes, including trying to derail President Trump's election campaign and ensure victory for Hillary Clinton.  It almost worked.  If it had worked, you can bet your boots we'd never have heard a word about all that's come out since the election.  It would all have been covered up, conveniently expunged from the record.  As it is, that was no longer an option;  so the only alternative for the security and intelligence establishments has been to pin all their hopes on a distraction - the "Russia! Russia!" campaign.

What's more, all the protestations about Russian interference in the US 2016 elections are so much hooey when compared to previous US interference in Russian elections.  Remember TIME magazine's cover and report of July 15th, 1996? 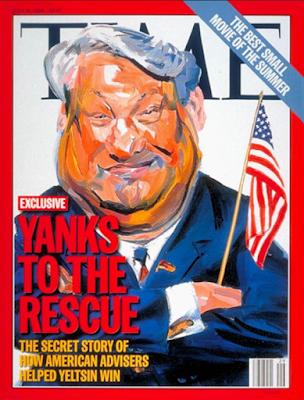 Both the USA and the former Soviet Union - and now Russia - have intervened in elections around the world for decades.  The Guardian points out that "Americans can spot election meddling because they’ve been doing it for years".

According to research by political scientist Dov Levin, the US and the USSR/Russia together intervened no less than 117 times in foreign elections between 1946 and 2000, or “one out of every nine competitive, national-level executive elections”.

Yeltsin relied on US political strategists – including a former aide to Bill Clinton – who had a direct line back to the White House. When Yeltsin eventually won, the cover of Time magazine was “Yanks to the rescue: The secret story of how American advisers helped Yeltsin win”.

Without the chaos and deprivations of the US-backed Yeltsin era, Putinism would surely not have established itself. But it’s not just Russia by any means, for the record of US intervention in the internal affairs of foreign democracies is extensive.


There's more at the link.  It's worth reading, to see just how bad both sides have been.  For further reading on US activities in that area (including the Obama administration) see (among other sources):

So, when the US intelligence and security communities scream about Russian interference, why should President Trump give any particular credence to their allegations?  They're experts in the field, after all, because they've done it themselves - probably more times than they can count!  The "Deep State" has been using the "Russia! Russia!" brouhaha as a lever, trying to exert pressure on President Trump.  That's been obvious for months.  Why should anyone believe those agencies and sources any longer, when they've effectively discredited themselves?

To cite just one example of how untrustworthy the critics are, let's consider John Brennan, former CIA director, who yesterday opined that "Donald Trump’s press conference performance in Helsinki rises to & exceeds the threshold of ‘high crimes & misdemeanors.’ It was nothing short of treasonous."  This is the same John Brennan who lied to Congress, producing headlines such as these:
Those are the same sources that are now reporting - and lauding - Brennan's accusations against President Trump.  What a difference a few years makes - not to mention a change of Administrations!

I think President Trump went to Helsinki prepared to face reality.  That reality is that both the USA and Russia have been guilty - equally guilty - of interfering in each other's internal and external affairs in the past.  Neither side can win by doing so;  but both sides can stir up - and have stirred up - immense problems for the other.  Instead of continuing in the same old way, why not try to "reset" the relationship between these two nations in accordance with reality?  That reality has to embrace realpolitik:  the reality, not the wishful thinking, of global relationships.

One has to start realpolitik by acknowledging facts as they are, not as one wishes they were.  I daresay both Presidents did so, at least implicitly, when they met yesterday - and that truth is not what's being peddled by the US security and intelligence apparatuses and their spokespersons.  I have no idea where things will go from this point onward, but I've learned not to judge President Trump by his words.  Rather, watch what he does.  That, and the fruits it bears, will be the ultimate judge of whether or not the Helsinki summit was a success.

Oh - and ignore the chattering classes.  They're irrelevant to reality.

One reason why the chattering was so overwhelming yesterday was because Trump exposed incompetence by both parties and by three presidents: Clinton, Bush, and Obama.

I’m surprised at the over the top reactions to what Trump did in Helsinki.

The conservative treehouse has one explanation.

Surprised? I'm not surprised. Over the top reactions to what Trump did, said, might have said, or might have thought about saying have been exploding at a rate of one a day. Any minute now I'm expecting to hear someone shriek, "OMG! Trump took a breath!

Or perhaps they'll phrase it as, "Trump inhaled!" After all, we know Clinton never did that.