We've discussed Illinois' catastrophic pension situation in these pages on several occasions.  Wirepoints has now conducted an in-depth study of the situation, and points out that the narrative being portrayed by the state government, unions and the mainstream media there is simply not correct.  The problem is that unions have been promised largesse by the state that simply can't be afforded.

One graphic perfectly captures the absurdity of Illinois pensions over the past three decades. 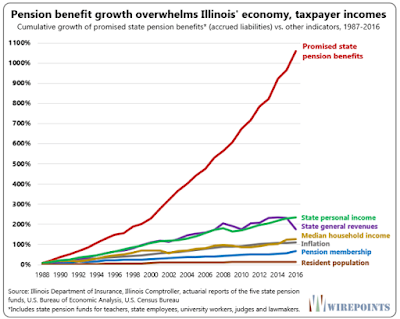 In 1987, pension promises made to active workers and retirees in the state’s five state-run pension plans totaled just $18 billion. By 2016, they had ballooned to $208 billion.

Contrast that to the state’s budget (general fund revenues) which was up just 236 percent over the same time period. Or household incomes, which were up just 127 percent. Or inflation, up just 111 percent.

Promised pension benefits have blown past any ability of the state, the economy or taxpayers to pay for them.

Wirepoints released a report on these booming benefits earlier this year ... The findings interfere with the narrative that’s repeatedly promoted by public sector unions and politicians – that the crisis is all the taxpayers’ fault for failing to put in enough money towards pensions.

Overpromising is the real culprit of the pension crisis. Freezing and reversing that growth in promised benefits is the fair, and only, way to fix things.


There's more at the link.  Also, read the report and article linked in the excerpt above.  They provide even more evidence about the unholy cabal that's driving this madhouse.

It's a vicious circle.  Unions demand more money for state government employees, and threaten to withhold their votes if they don't get them.  Politicians cave in to their demands:  but they haven't got enough money to pay out immediate benefits such as higher salaries.  Instead, they promise bigger and better pension benefits in future years - then turn around and tell taxpayers that they have no choice but to fund those benefits, because it's a contract between the state and its employees.  They never bother to tell taxpayers that it's a contract that should never have been agreed in the first place!

This is a perfect illustration of regulatory capture.  A pressure group (whether a union, or a company, or a group of unions or companies, or whatever) gains sufficient influence over politicians, or an administration, or an agency of that administration, to ensure that its interests override those of every other interested party when it comes to a particular issue, whether or not that's good for the rest of the state or nation.  In Illinois, government employee unions have "captured the state" in terms of getting what they want, when they want it, and to hell with the taxpayers.

It's long gone time for Illinois taxpayers to indulge in a little regulatory capture of their own, and tell the unions and the corrupt state government that indulges them to go to the hot place.  However, I won't hold my breath waiting, as Chicago's voters control the entire state, and the corruption in Chicago is legendary.

If I were living in Illinois right now, I'd be making plans to move to another state at almost any cost, even if I lost money by doing so.  Given the extent of that state's fiscal mismanagement, and the likely burden upon taxpayers to pay these exorbitant pension demands, there's no future there worth having for private citizens.  What's more, if I was owed money by Illinois, whether a pension or in any other form, I'd be planning to do without it, because the odds are getting better and better that the state won't be able to pay it.

That probably means that before long, Illinois' corrupt politicians and their union cronies will be calling upon the Federal government to bail them out, at the expense of every taxpayer in the USA.  Other states that have similarly mismanaged their finances (California for sure) will probably do likewise.  I can only hope and pray that the response to such demands will be "Not just no, but HELL, NO!"  Why should US taxpayers have to bail out Illinois unions and politicians, only to allow them to continue in the same vein as before?

If they cut so much as a nickle from these pensions the Democrats will inundate us with sob stories until they can get the burden transferred to the rest of us.

This is where Civil War II has the best chance of starting. Illinois declares bankruptcy and breaks all contracts. Unions pressure the feds to pay the obligations, which would mean people in Texas, Florida and other growing states - at least some of whom moved from Illinois to escape it - get raped. And there are more. Illinois is just a well-studied example.

As I always say, infinity is handy concept in math but it's a terrible way to budget.

Maybe more to point is Margaret Thatcher's, "sooner or later you run out of other people's money". They're right there now.

"Wirepoints has now conducted an in-depth study of the situation, and points out that the narrative being portrayed by the state government, unions and the mainstream media there is simply not correct." Translated, it's a BIG-ASS LIE.

Yep, counting on .gov to bail their asses out... Remember Detroit REFUSING to sell their artwork? That would have brought in Millions!