Another nail in the coffin of politically correct comics


We've discussed the plague of political correctness in the comic industry in these pages before.  Fortunately, enraged fans are voting with their pocketbooks and wallets in unprecedented numbers, bankrolling independent comics that are emerging as a real force in the market, and strong challengers to the established publishers.

Jon del Arroz, a fellow author and friend whom we've met in these pages before, is trying to join their number.  He's launched a fundraiser to publish his first independent comic - and he's looking for a lot less money than some of his competitors, which I think is a good sign.  He's starting small, and looking to lay solid foundations on which to build.  He had this to say about it on his blog.

Working in comics has always been my dream. Well before I finished my first novel, I’d been writing comic scripts. I worked on a viariety of web comics with different artists of varying amateur skill who would pair with me… most only lasting about 4-5 pages before they burnt out and wanted new and fresh projects (artists are really flakey!). I’d written a few shorts that appeared in a couple of anthologies as well, just to try to test my abilities as a writer and make sure I could make a script flow. But I wanted to have the big show, a real comic book that was serialized like the old books I used to read.

It wasn’t long before I began craving a superhero universe of my own. 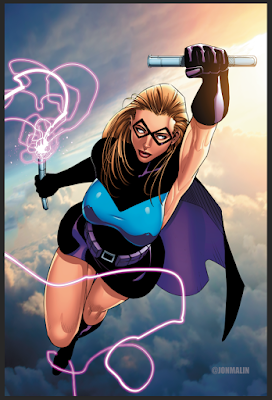 Today, we have the first 3 issues of Flying Sparks on IndieGogo, and the main story is about Meta-Girl and the original villain, Johnny Benvinuti, as their paths cross, intersect. It’s a hero and villain in love, but neither of them know about each others’ secret lives. 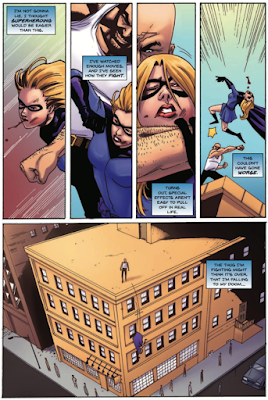 My goal is a modest $6,000. I’ll be honest, the goal even doesn’t cover the art costs of the issue, but just the printing, production, and the brand new cover by my great new friends Jon Malin and Brett R. Smith. My hope though is to do quite a bit more than this in order to really build this Flying Sparks universe out into something special in these years to come. I’m okay with funding at this point because I want this story to get out to the world and to push comics forward and change the industry.

We can make this happen as a community, and I thank every one of you for being there with me on the journey so far. This community has been so amazing, and so supportive, I’m glad I have the best fans and friends in the world here to take this next step with me.


There's more at the link, where you can read about Jon's two lead characters, the artists, and so on.  There's also a lot more information on the Indiegogo fundraiser page.

I like Jon, and I like his hard-working ethic, and willingness to put a brand-new project like this out there and ask for our support.  The more independent artists, authors and entertainers do this, the better all of us will be served.  I'll be contributing to his fundraiser, and I'd like to ask my readers to consider doing the same.  Click over there, read the details for yourself, and see what you think.  I'd like to see Jon reach, not just his basic goal, but his stretch goals as well.  This looks like a fun project, and I'm pleased to be part of it.

You left out the Worldcon rejected his registration and trashed him (IIRC). They could be just stupid, or just nasty, but the Power Of AND works best for me.

Ya know what? Shove your politics, guys. Tell me a STORY.

The politically correct comics do it because preaching propaganda is easier than originality, plot and theme. Comics should encourage readers to think for themselves, not tell them what to think.