This news report dates from 2015, but I only just noticed it.  Better late than never, I guess!

An ISIS commander in Syria became a figure of mockery, thanks to his battledress. 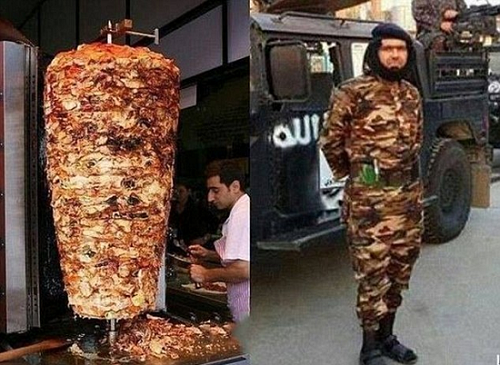 Anti-Isis activist group Raqqa is Being Slaughtered noticed the similarity and posted it online, where it quickly went viral.

Wahib can ditch his ridiculous, yet strangely tasty looking outfit, but it isn’t only his sartorial choice which has caused people to mock him.

His portly figure, beard that looks like something Sacha Baron Cohen would wear, and distinctive mono-brow have made him the laughing stock of the vicious terror group.

Abu Wahib was killed by an air strike in May 2016, according to news reports.  One trusts he didn't show up to meet his promised 72 virgins wearing that outfit.  They'd have turned vegetarian on the spot!