Police were not amused.


Police in Siberia have fined a local blogger for cruising the streets of Tyumen inside a bathtub, stirring a social media storm in his support. 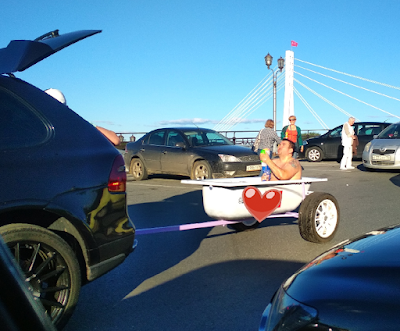 Online images published this weekend showed the shirtless man washing himself inside a tub fitted with wheels and towed by a van through the city’s streets. A video montage depicted the bather, blogger Eduard Filippov, ordering food at a drive-thru from inside the tub, greeting nearby pedestrians and shooting at cars with a squirt gun. 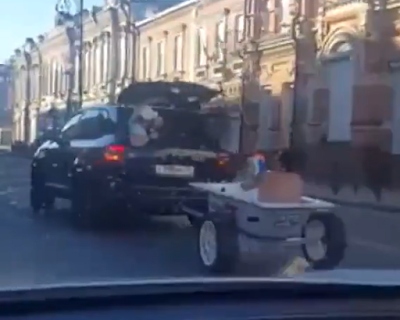 “Do whatever you want, they’re still going to judge you for the rest of your life,” he wrote in an Instagram post announcing his bathtub ride. 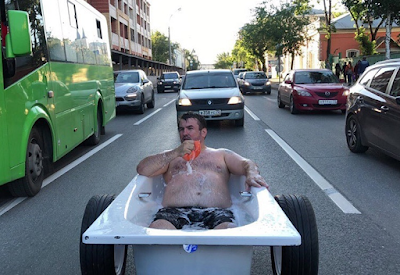 Tyumen traffic police said they saw the online images and fined both the driver and the bather for violating safety rules.

Well, at least he decided to do it during the Siberian summer.  Winter might have been a bit more frigid!

Labels: Attaboy!, Boys and their toys, Cleanup, Funny, Other blogs, Silly
Email ThisBlogThis!Share to TwitterShare to FacebookShare to Pinterest

And thanks be to God he kept his britches on!

Is bathtub. Is not safe.

In winter, they jump into frozen lakes. Zakaleniye.

Peter, you haven't lived until you do a Polar Bear Jump into the Chena River at Fairbanks on New Year's Day. Talk about invigorating!

"Do whatever you want, they're still going to judge you for the rest of your life."
Another inconvenient fact of life, for sure. True words, boldly spoken.