But is it art?


I'm a bit mind-boggled to learn, via an article at io9, of a Dutch artist, Jalila Essaidi, who's made a form of bullet-proof human skin - as an art project! Her work apparently falls under the label 'BioArt', which appears to have been around for a while, although I hadn't previously heard of it (at least, not under that name). She calls her project '2.6g 329m/s', after the weight (in grams) and velocity (in meters per second) of a .22 Long Rifle bullet. Here's an extract from the project description, with a photograph from her Web site.

By implementing this bulletproof matrix of spider silk produced by transgenic goats in human skin I want to explore the social, political, ethical and cultural issues surrounding safety in a world with access to new biotechnologies. Issues which arise on the basis of ancient human desire for invulnerability. It is legend that Achilles, the central character of Homer’s Iliad was invulnerable in all of his body except for his heel. Will we in the near future due to biotechnology no longer need to descend from a godly bloodline in order to have traits like invulnerability? 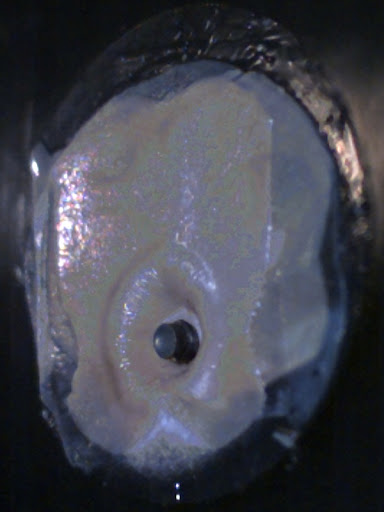 With this work I want to show that safety in its broadest sense is a relative concept, and hence the term bulletproof. The work did stop some partially slowed bullets but not the one at full speed. But even with the skin pierced by the bullet the experiment is still a success. It leads to the conversation about how which form of safety would benefit society.

There's more at the link, including many more photographs. Here's a short video clip of the artist discussing her project.

Seems daft to me . . . but then, I've never claimed to be an artist, particularly in the modern sense. I'm much more into the classical school. Give me a good landscape, or an Impressionist, any day! (Also, given a choice between a piece of genetically-modified, questionably-bulletproof skin or the gun used to test it, I'll take the gun!)

The long-term trick would be create a gene for this biotechnology and re-film Dune. Although I do like the idea of using spider silk.

The idea of natural genetic bullet resistant skin sounds pretty cool. Aside from bullets, there are lots of reasons why tougher skin would be useful.