An aircraft accident in Buttonwillow, California had an unusual twist. The National Transportation Safety Board report states:

On June 13, 2011, about 1825 pacific daylight time, a Grumman G-164A, N5286 sustained substantial damage when it departed the runway and collided with two dumpsters at a private airstrip in Buttonwillow, California.

The pilot stated that on the day of the accident he had conducted numerous landings on the accident airstrip and the brakes where "a little worn out," but had operated well enough to allow stopping on the runway. The pilot further stated that he was fatigued and dehydrated after flying for nearly 8 hours. On the accident landing the pilot reported that he was slightly fast on the approach with a tailwind of approximately 5-10 knots. Upon touchdown he was unable to stop the airplane before the end of the runway and exited the right side. After the airplane exited the runway the airplane's right wing struck a dumpster. The initial impact with the dumpster caused the airplane to spin into a second dumpster with which the airplane came to rest against. 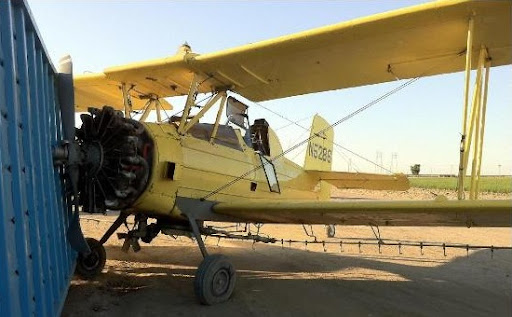 Immediately after the accident the owner/operator checked the brakes and found them to be operating normally.

What did he learn from the accident? Abbott and his employer told the investigators: "Emphasize to pilots the need to keep a clear head," he said. "Take breaks when needed even if there is more work to do. In the summer heat, they need to stay hydrated and take breaks. Never stop 'flying' until the plane is in the hangar."

Words of wisdom, which might also be augmented with - Keep dumpsters far away from the airfield ...

To that last statement - No s***, Sherlock! Fortunately, no-one was hurt, so it's a lesson learned relatively inexpensively - but who on earth made the decision to put dumpsters that close to a runway? The area surrounding them is supposed to be kept clear of all obstructions and things that can cause problems for aircraft running off them. Clearly, in this case, someone slipped up.

I hope that he managed to kill the motor and stop that prop before impact.

Why try to land a kite like that with a tailwind? Just cutting corners to save taxi time?

Judging from the nasty twist in the lower blade, I'd guess not.

I'd guess said "airstip" serves other purposes when not being used by the cropduster.

That's his weekends taken care of for the next few months. Wing repair or rebuild. Engine strip down and repair.