I can hear the inter-service jibes already . . .


I imagine the US Air Force is making all sorts of jokes at the expense of US Naval Aviation right about now. Military Times reports:

A Navy F/A-18E/F Super Hornet became the first U.S. fighter jet ever to be flown home from war inside a cargo plane on Aug. 18.

From an Air Force announcement:

In March, while supporting Operation Enduring Freedom, the Hornet experienced malfunctions which caused it to divert and land at Kandahar Airfield. Upon landing, the aircraft experienced hot brakes and upon stopping, both brakes were engulfed in flames. The Kandahar, Fire and Rescue extinguished the fire, but the right fuselage was severely damaged.

I’m sure the C-5 crew was pretty amused by the fact that they were carrying a hot $h*t Navy fighter back to the ‘states in their cargo deck. 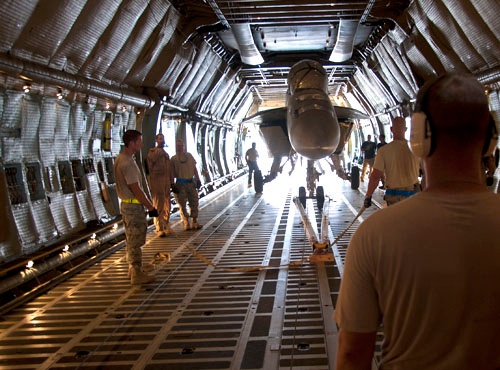 The whole effort required the help of ‘units across the base” according to the Air Force. The air service’s expeditionary RED HORSE civil engineers even had to build wooden ramps to help ease the fighter onto the C-5’s aft cargo ramp. Meanwhile, Marine aircraft technicians helped Navy officials dissemble the aircraft and prep if for its journey home. Apparently, transporting the Super Hornet home cost a third of the $65 million price tag for a new F/A-18E/F.

There's more at the link, including another photograph.

Why do I think that the pilot who landed it at a USAF base in Afghanistan, rather than back aboard his carrier, is still living down the jibes of his Navy colleagues? (For those who haven't served in the military, you wouldn't get it; but for those who have, I'm sure you're chuckling as hard as I am!)

I wonder if the Air Force will continue the Navy tradition of "signing" the aircraft that land on the wrong carrier?