What would you buy with $1 million?


To be a millionaire today isn't quite what it was a few decades ago, when a million dollars was 'real money'. The US dollar has, according to the US government's own figures, lost 95% of its buying power over the last century.

In 1970, at the age of 77, Herbert W. Armstrong wrote about how as a boy his mother had asked him to “[g]o to the meat shop and get a dime’s worth of round steak. And tell the butcher to put in plenty of suet.” A “dime’s worth” meant each person in his family received a modest-sized piece of meat, plus plenty of gravy for the potatoes.

In times past, the dollar certainly stretched further. Mr. Armstrong quoted the Labor Department’s figures for how much $5 would have purchased in 1913: 15 pounds of potatoes, 10 pounds of flour, 5 pounds of sugar, 5 pounds of chuck roast, 3 pounds of round steak, 3 pounds of rice, 2 pounds each of cheese and bacon, and a pound each of butter and coffee; that money would also get you two loaves of bread, 4 quarts of milk and a dozen eggs. “This would leave you with 2 cents for candy,” he wrote.

Nevertheless, $1 million is still a useful chunk of change. CNBC has put together a pictorial presentation of what it can buy you. Their list includes, among other alternatives: 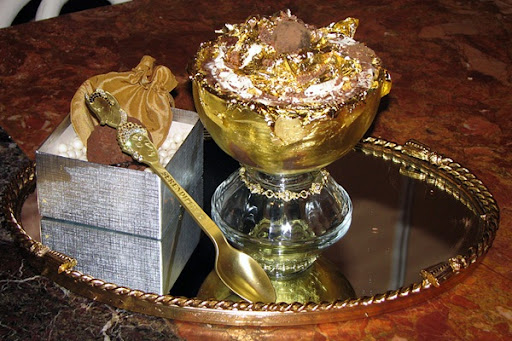 So, dear readers, how would you spend a million dollars if the Money Fairy left it under your pillow tonight? Please let us know in Comments.

Some land & a house somewhere inland from here, and well-stocked larder. (I already have lots of guns...)

Fully tooled out diveboat, with lots of extra equipment, and use the spare change to start a business, pay the first period's wages and fuel the boat...

That way I could truly be making a living doing what I love.

A snug house on land with iron-clad water rights and a very good spring; A savannah cat or pixie bob cat, just to mess with people's minds (I'd also donate twice the cost of the cat to the local animal shelter); Donate a chunk to a couple of charities; Buy photo rights to use in illustrating my next book(s). I'd love to get an airplane but the care and feeding of same would be a "wee bit" of a problem.
LittleRed1

A million isn't that much anymore. But if I intend to keep it, I'll transform it into gold, silver, &c. Real money.

If I intend to spend it, I'm setting up a fund to fight corruption and the abuse of our rights. A million dollars could be the antidote for "I (or he or she) would be in the right there, but the legal costs would be ruinous."

100 acres or so of mixed farmland and woods with a natural, clean water source on it and an old farmhouse that I can renovate just enough to have modern plumbing, wiring,and HVAC.

Then I'd re-create several scenes from Willy Wonka and the Chocolate Factory in the local Bass Pro Shop.

Find a way to make it into two million, or four, so I could could do the sensible thing and pay off my student loans, get a chunk of land where I could shoot skeet nekkid off my back porch while having a bonfire and the neighbors would neither know nor care, and assure the care and feeding of my Calmer Half, myself, and my airplane...

While also having enough to get a P-51D and pay for her care and feeding. Because a million just ain't enough to keep a team of good mechanics, all the spare parts, the avgas, and the lovely bird ready to fly.

Yes, I'm with Wing re: making more money out of it. Paying off debts, paying for my schooling and that of my children, then going off the grid somewhere. Nice dream.

Little cabin in the Great Smokey Mountains, a Hennessy Velociraptor (Ford F150 SVT Raptor tuned by Hennessy) and replicas of a S&W Schofield and a Winchester 1876 Carbine. And plenty of ammo for the guns.

Everybody is right on the money, so I won't go there. I would add: fence our property, put on a new roof, then give my daughter and son-in-law the money to buy the house of their dreams, with land; feed our local Food Bank with usable cash until they yell "enough"; give $10 mil to my university's Performing Arts School which the State (CA) and School President cannot touch-EVER!

I am ashamed - I left out my son, because he is quiet, so self-sufficient, he never asks for anything. I would help him find and pay for an editor for his patented book on learning to read, and make it possible for him to go to school - JC, then any four-year his heart desired. This would keep him busy enough so he would only choose to work part-time. (We all have to work at something for the soul, and to keep us sane.) It would also help him to finish his current book. He deserves the best - he's worked long and hard, WITHOUT A WHIMPER!

My inner child wants to buy an Aston Martin V12 Vantage GT3, a transporter, and a bunch of race gas and tires (with a helmet, fire suit, HANS, and &c. in there) and start a "career" as a race car driver. Okay, I'm only after the Vantage GT3 because it's in the news today; I'd probably "settle" for a Porsche 911 RS.

More realistically, that's ten comfortable years to put together a startup and do a bunch of club-level kart racing on the side.

One million would allow me to pay off all of my debts--house, car, student loans, medical, credit--with some left over beside, and my family and I would be extremely comfortable on our current salaries.

I'm back, and after thinking about it, if I get a trillion, I'll triple anything above, and get a Honda Accord with cruise control. Then I'm going to take a freighter cruise around the world with the cook! Thanks for the money. :)

Turn a quarter to half of it into gold and silver, "just in case", and then invest the rest.

If the Money Fairy left a million dollars under my pillow, you'd never find out about it. :P

If I still have money left over, get a new laptop and get a new car, squirrel the rest away for safekeeping.